He-Man and the Masters of the Universe 2021 is an excellent update to a beloved series. 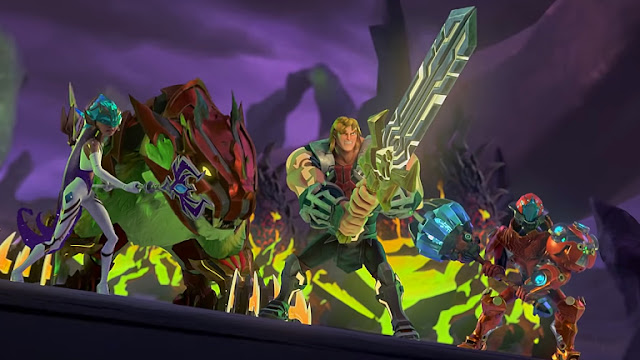 If you had asked me at the beginning of 2021, I would never have guessed that Netflix would launch two He-Man and the Masters of the Universe series. The first (called Revelations) dropped at the height of summer, and it was a revisit of a lot of nostalgia and helmed by Clerks creator and comic book geek, Kevin Smith. Ultimately, I wasn't really satisfied with that series, because it was only six episodes. It felt too short, and the plot barely seemed to get going before it ended with a cliffhanger. I do hope that it gets renewed for season 2. I wasn't even upset that Teela was the main character, as telling the story from her point of view seemed right to do in this moment of time.

However, this latest offering from Netflix of He-Man and the Masters of the Universe doesn't pretend to be any kind of offshoot, sequel, or conclusion to the original. It's a complete prequel wrapped in a solid suit of reinvention. I found that to be kind of interesting. The animation is the same that we got in the series Trollhunters in case you've watched that. But if you haven't, kinda think of Pixar-level animation and then take it down a notch to where it's essentially a very cartoony version of Star Wars: The Bad Batch.

I ended up really loving this show a lot more than I thought I would. In this particular reinvention of He-Man, the power of Greyskull which transforms a gangly teenage boy into the very swole hero, is shared between a bunch of people. Teela is now cast as a lady with dark skin who is a powerful magician in her own right even before Greyskull empowers her further. Afterwards, she's essentially a sorcerous supreme, capable of incredible feats of magic. Then Prince Adams best friend is Ram-Ma'am, who is a gender-swapped version of the original cartoon's Ram-Man. The others joining He-Man in sharing the power of Greyskull are Man-At-Arms, and Cringer (Battle-Cat) who comes from a tribe of talking cats and who has no claws. Orko doesn't make an appearance until about midway into the series, and he's the reincarnation of a powerful ancient magician who is trapped in the body of a metal robot that flies around.

Skeletor is actually Prince Adam's uncle, who makes a terrible choice in Castle Greyskull and ends up getting his flesh all melted off. That was interesting to make Skeletor of royal blood. I don't know if that was something in the original series, but hey...it works in this reboot. Another thing that works is the humor. There are several one-liners which are quite clever and had me laughing (some of them obviously break the fourth wall and allow the show to poke fun at itself).

The story is definitely for kids. However, there's lots to like about it for adults who don't mind taking a nostalgia pill and opening their mind to new possibilities with regard to the intellectual property of He-Man and the Masters of the Universe. I also really liked how it was diversified now, and that He-Man as the hero doesn't exist within a vacuum. He isn't a deus ex machina. Rather, his friends are extremely important to his success, and they wield just as much power as he does. In other words, he is no longer unique in being able to channel the "power of Greyskull." The animation sequence of the team "powering up" is straight out of video games, and I have no doubt will make kids eyes bug out with amazement even if I got a bit tired of it after several episodes (my only real complaint).

Has anyone else watched this show on Netflix? If so, what did you think?

Email ThisBlogThis!Share to TwitterShare to FacebookShare to Pinterest
Labels: He-Man and the Masters of the Universe 2021