I'm optimistic that the Wheel of Time series will be both entertaining and accepted by Jordan's rabid fanbase. 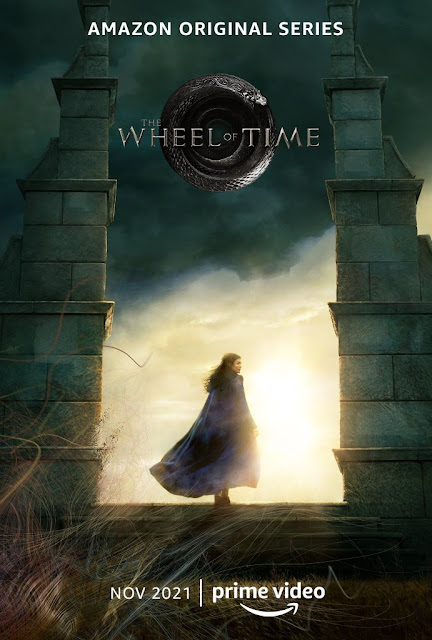 "The Wheel of Time turns, and Ages come and pass, leaving memories that become legend. Legend fades to myth, and even myth is long forgotten when the Age that gave it birth comes again. There are neither beginnings nor endings to the Wheel of Time. But it was a beginning." (I think that this little tidbit appears on the first page of every book in this gigantic series)

I do have an admission when it comes to The Wheel of Time. I am a second-generation geek of long standing when it comes to these books. I have never read them for various reasons. The first is because people who had read them warned me that they liked them until about the 6th book (or so) and then it was just a chore to go from there to about the 13th book. To be honest...that is not really selling this series. Then there are those who say that they are not fans of how Sanderson finished them off (after Robert Jordan died), and that Jordan is verbose in a terrible way. I guess he was an author (like George R.R. Martin) who wrote himself into the weeds and couldn't find his way back. Additionally the shortest book is 650 pages while the longest is over 1200. Most weigh-in at over 800 pages.

That being said, I was briefly excited when The Wheel of Time trailer from Amazon Prime dropped last week. However, after watching it a couple of times, I have thoughts about what I saw. My comments fly in the teeth (of course) of true fans of the series. I hope that I'm proved wrong. On second watch, the series looks like something from the CW with a slightly bigger effects budget for the landscape shots. The actors are attractive but expressionless and the trailer shows them on sets with CGI laser spells and sky-beams. Additionally, the indoor stuff looks like it was shot in a converted high school gym. I'm honestly getting a Shannara Chronicles vibe, but without a person wearing yoga pants.

However, I'm still going to watch it. Maybe it won't be just another derivative fantasy offering? It seems to me that it is super easy to make fantasy projects look cheesy. I'm not sure how Lord of the Rings avoided this trap, but they did. So did Game of Thrones. I hope that the people behind this project have studied the success of those two franchises for clues, because the fandom surrounding The Wheel of Time honestly is a bit toxic. It's almost like a religion, probably helped along this road by the fact that Sanderson is a Mormon and was a professor at BYU. And since a lot of people in Hollywood are artsy, and hence...liberal...I fear that people who have liberal views are probably going to try and change some of the subtext of Jordan's work to make it more woke. They need to not do this under any circumstances. We live in a time of severe polarization in politics, and I think that meddling with a story that is so gendered centric that there is gendered magic at its core...would be a huge mistake. It will anger the trolls, of which there are millions.

Amazon must be very excited to have two of the biggest fantasy franchises in that genre's history. As Spider-Man has often said, "Those with great power have great responsibility." I guess we are going to see soon how well Amazon handles that responsibility. Below is the trailer for the first season of The Wheel of Time in case you haven't seen it.

Email ThisBlogThis!Share to TwitterShare to FacebookShare to Pinterest
Labels: I'm optimistic that the Wheel of Time series will be both entertaining and accepted by Jordan's rabid fanbase, Robert Jordan, The Wheel of Time