I wonder if Netflix's Sandman will be better than American Gods on Starz. 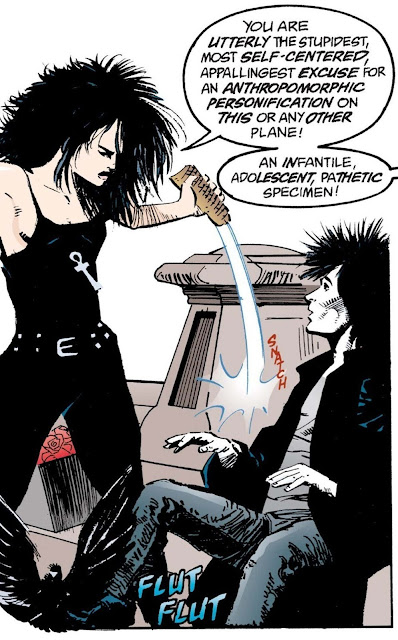 American Gods on Starz went really off the rails. I actually never finished the show, but I think that the showrunners had trouble making a series out of the limited content that they found within the book. I mean, American Gods is only so long...and it has a bunch of characters with the main character (Shadow) being quite arguably the most boring of the bunch. I liked the read, but a lot of Gaiman's works tend to be cerebral with complex characters who are shocking modern interpretations of ancient religious symbols. Interacting with these characters briefly was the fun part. But spending extended amounts of time with them stretched out over a series in the context of modern Americana wasn't as fun as I thought it should have been.

That being said, The Sandman is my earliest recollection of the Vertigo imprint of DC Comics, and I actually used to own a Sandman number one, which is probably worth quite a bit these days. I got it relatively cheaply by purchasing it brand new when the comic debuted. The artist was the one who drew me in, but Gaiman's writing was solid as well. The thing is, Gaiman's adaptations tend not to translate well to American television.

I think the last adaptation I actually enjoyed that was made from Gaiman's works was Good Omens. But I wonder how much David Tennant and Michael Sheen made that possible as opposed to the writing of Gaiman. I've actually never read Good Omens, so it's a legitimate question.

The problem with Sandman is that the characters are pretty out there. My guess is that the show will need to tone down and streamline a bunch of stuff that is at the crux of what makes the entire story compelling in the first place. Additionally, Death's look in the comics was a hugely entertaining part of her character. However, I don't remember "goths" being a thing back in the eighties when I saw this comic for the first time. Now "goths" are everywhere, and the look is honestly really tired. One can blame places like "Hot Topic" for cashing in on this trend I suppose. But the blamethrower really doesn't solve anything after the genie has escaped from the bottle. What's done is done.

I am reluctantly excited for this, but I'm skeptical that Netflix can pull this off. Down below, I have attached the "first look" from Netflix. Bonus that we get Charles Dance pretty early on in the show. I've been a fan of his for years.

Posted by Michael Offutt, Phantom Reader at 9:01 AM

Email ThisBlogThis!Share to TwitterShare to FacebookShare to Pinterest
Labels: I wonder if Netflix's Sandman will be better than American Gods on Starz, Neil Gaiman, Sandman