The Expanse season four was just one of many gifts us fans of science fiction received in December 2019. 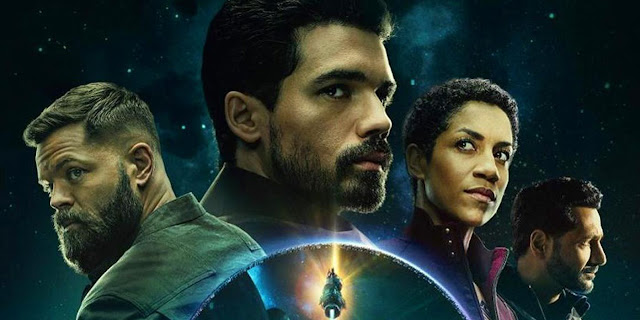 December 2019 was a big gift to people (like me) who enjoy shiny new entertainment options to indulge in while on the couch. In one month we got the conclusion of Star Wars: The Mandalorian, the second season of Lost In Space, the fourth season of The Expanse, and a brand new Star Wars movie (one that author Patrick Dilloway alone has probably said all that needs to be said on it). For what it's worth, I agree with nearly all of his assessment but am mostly still preoccupied with the question: Why is the Force so much more powerful in the last three movies? I probably won't ever get a satisfying answer to that other than "Because it looks great on the big screen." And when it comes to Star Wars properties do we honestly expect anything more? I think the bar for that story (and any stories in that universe) is firmly grounded in visuals and optics. As long as it looks cool, then it belongs in Star Wars, even if nothing ever makes sense beyond the age of 12. So I'll leave that at the door and move onto what I really wanted to talk about in this blog post, which is the fourth season of The Expanse.

Without even knowing the details of the behind-the-scenes negotiations, backroom deals, and how any of "the sausage gets made," I can say that I'm thoroughly impressed with what the influx of Amazon/Jeff Bezos money has done for this franchise. Season 4 felt even more impressive on its surface than any of the prior three seasons, which I loved. Season 4 also made small decisions to cut certain storylines that I felt were extraneous to the plot of the fourth book in the series, Cibola Burn.

For example, much of the book is taken up with the perspective of the botanist from Ganymede named Prax, who proves to be incredibly resourceful in finding solutions to keep a cargo carrier from the Ilus colony from burning up in the atmosphere (when nuclear fusion gets "turned off" in the system in which Ilus lies). It does serve to strengthen that character going forward (in the books). However, by cutting him, the showrunners made clever decisions that weaved plots from short stories, novellas, and book five (called Nemesis Games) into the narrative to tell a more cohesive story that makes sense within the entire arc of The Expanse as a whole.

It also sets up season five to be incredible (and yes it's already been renewed for a fifth season), because it gave us "just enough" of the new big bad of the series, Marco Inaros. Because we are introduced to Marco now, he's more than just Naomi's former lover. We understand him as a true psychopath whose motivations kind of echo what our real-life President Trump says when he shouts, "America first!" In Marco's situation, he's screaming "Belters first!" But what does that really mean? In the universe of The Expanse, it translates to Marco stopping at nothing to ensure that "the Belt" is served very well by his actions. He does not care one inkling for Mars or for Earth, because they are "The Other." If you are familiar with the books, Marco's direct actions result in the deaths of 30 billion people, and that's going to be horrifying and exciting to see how a psychopath stands atop all of those corpses with a belief that he is serving his people in the best way that is possible. How could anyone see him as anything more than the worst monster ever produced by humanity? And, how is this going to affect Naomi, who is Marco's ex and the father of a son she loves very much?

I know that part of the reason The Expanse had to cut sections of book four to weave in these other narratives is also because actors are on contract and they need to get paid and to act in this series. Book Four of The Expanse series does little if nothing to grow the characters of Avasarala, Bobbie, and Clarissa Mau (who got a single cameo in this season, but is exceptionally important in books five and six and seven). To expect them to stick around through a season in which they do nothing might not have flown over well. So the compromises the showrunners made seem to be remarkably intelligent, preserving the core of the story really well (far better than what was done in Game of Thrones), and the whole series continues to be something I savor and revisit often by re-watching with friends who haven't seen any of it.

My final thoughts on The Expanse might answer the question: Is the transition to Amazon noticeable? From my perspective it feels seamless, even down to the introduction sequence. However, it also feels even more gorgeous and immersive than it has ever been. Up until this season, the stories were smaller. The sets were incredibly detailed, but I think this wasn't hard for SyFy to do because a lot of the action took place in tunnels, in space ships, and in locations on Earth (so they could just film on location somewhere). Season Four takes place on an alien planet, so I know it had to be expensive. And you can see that Amazon cut no corners with the alien ruins (which look cyclopean/Lovecraftian in the same way H.R. Giger's ruins looked in the Alien movies or in the movie, Prometheus). The acting talent is top notch, and the writing is super-tight. The sets (as well) are so detailed and lovely. There is so much to look at in every screen that the show just feels epic in a way that not many shows these days can accomplish. Absolutely nothing looks cheap. So, I'm just gonna say, "Huzzah for Amazon!"

On my Wednesday blog, I think I'm going to talk about another show I really love called Lost in Space.
Posted by Michael Offutt, Phantom Reader at 12:17 AM

Email ThisBlogThis!Share to TwitterShare to FacebookShare to Pinterest
Labels: Expanse Universe, The Expanse, The Expanse season four was just one of many gifts us fans of science fiction received in December 2019