I think I know why people are so lonely in America. 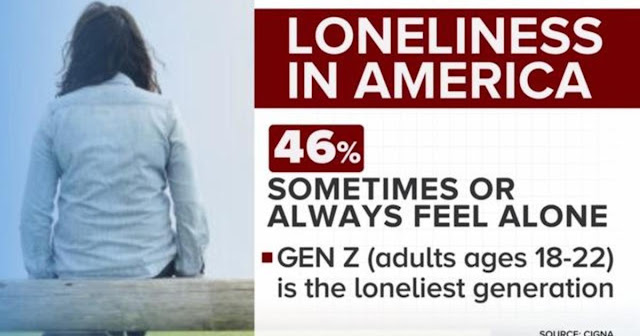 There have been many reports from reputable organizations and news agencies that have reported on the epidemic of loneliness in America. I've seen reports that as much as 47% of Americans say that they are lonely in their lives (this is quite high, people). There are a lot of theories as to why, but I think many of them miss the mark. You can read about them online if you like. I just won't talk about them here.

Now, I've thought about the epidemic of loneliness a lot, and I identify four solid reasons (that come from my observations) that cause Americans to live alone and to experience vast swaths of loneliness without actual human contact. It's an unhealthy dystopia we're living in, and I don't think it's going to change anytime soon. If you feel lonely and are reading my words, I'm sorry this is happening to you, because it will affect your overall health and life-expectancy. But I don't think it will change. If anything, it's going to get worse.

So, without further ado, here are the reasons I've identified:

1) People have no time for growing relationships, because they are career and experience/ professional-achievement driven. You might hear this reason: "I don't have time after school, work, etc. to do anything because I'm busy achieving 'X'." And "X" in this case can be anything.

2) People are not suitable for relationships with anyone, because society/religion/capitalist dystopia has repeatedly traumatized them, and/or they have traumatized themselves by making poor decisions and have essentially "bombed out" in life (also known as "failure to launch."). This trauma and failure has allowed personality disorders (take a pick) to set in, and if you don't know, personality disorders are lumped under the generic term, "mental illness." So loneliness seems like a logical consequence of having mental illness. And of course mental illness often is a gateway to drug use and the spiral around the drain begins....

3) People are not suitable for relationships, because they become delusional about their personal achievements and they are looking for a partner that matches that particular delusion. The only problem is...matching a person to a delusion inevitably doesn't work, because a delusion is "not real." All sorts of things come out of this particular reason, like FOMO (fear of missing out), anxiety, depression, and just general lack of enthusiasm or lack of appreciation for another human being. This is basically a version of the Dunning-Kruger effect, which was a study that identified how people believe they are far more skilled at a thing than they actually are.

4) People have no time for growing relationships, because their family controls all of their time and all of their activities. To get to know a person in this situation, you basically have to marry the family, get approval from the family to spend time with a person. IF you manage to do this, then you actually get to know the person. If the family doesn't like you or feel an incentive to like you, then you are out of luck. To some extent, there is an old adage that plays to this by saying, "If you want to get to know 'X,' then befriend the friends of 'X'." Only, I really do mean "family" these days as "family" has become synonymous with extremely close friends as well as family's who are so distrustful of strangers that neighbors hardly talk to each other anymore. An example of this is any neighborhood in Salt Lake City where I live. You'll see that there are walls and gated communities everywhere. My brother says, "Good fences make good neighbors....", but all of those walls and gates are really broadcasting a message akin to "Keep Out." In some situations it may even be a message like, "I'm putting up this wall to help you contain your shit, because I don't want any of your crazy over here."

It's a sad truth of modern life, but getting to know people beyond their biography on a screen is (I think) more difficult than it has ever been in history. How we got here might be a symptom of society becoming increasingly more difficult to meet basic physical needs for oneself. As the bar to get 1) housing, 2) food, 3) education, and 4) healthcare keeps going up, then that added pressure is going to force people to hustle for fewer opportunities that are any good.

Anyway, this is just my two cents.
Posted by Michael Offutt, Phantom Reader at 8:12 AM

Email ThisBlogThis!Share to TwitterShare to FacebookShare to Pinterest
Labels: I think I know why people are so lonely in America, loneliness