Dr. Smith is the most fascinating character in the Netflix series Lost in Space and she reminds me a lot of myself. 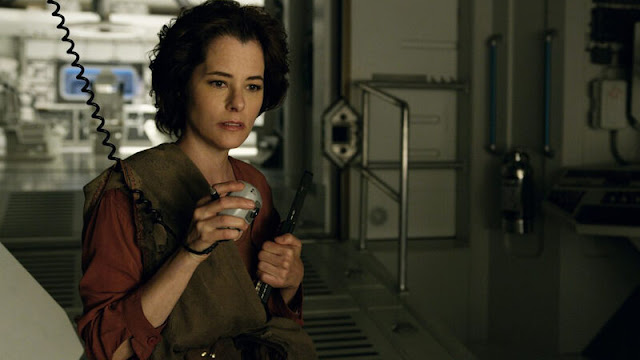 Netflix's reboot of Lost in Space is a solid show that I enjoy re-watching with friends, and it's one I look forward to seeing new seasons from when they are released. It hasn't been "officially" renewed for season 3, however, the showrunners are already working on it. So this seems to be a good sign that it's coming, and they just haven't gotten around to issuing any press releases about it.

Pretty much pulled from the 1964 version of the series and given a new coat of varnish with updated special effects, the thing that works for me in this show is how they keep the stories very small. The Robinsons are never part of some galactic event like you might see in other science-fiction shows like The Expanse. One season (thus far) tends to explore maybe one or two locations at most. There's usually an Earth-like world to walk around on and have conversations, and there's usually an outer space location that's some kind of spaceship with stunning vistas out the windows and viewscreens. Season Two's setting was mostly this ship called The Resolute and the "alien" elements were a gas giant and a bunch of robots. It's more or less a show about overcoming challenges, so it has that element where you are picturing yourself as a member of the crew trying to figure out (along with them) how to solve a particular challenge. And each crew member is given their moment to shine.

The most interesting crew member of Netflix's reboot (for me) is Dr. Smith. She's the "villain" of the show if there is one, but I really sympathize with her in certain situations because I see a lot of myself in this character. Mostly, she's a selfish person and has no qualms admitting this to people. In her own words, she says, "I love myself. How is that any different than you loving your children? Instead of someone else whom I'm willing to sacrifice anything for, I choose to do that for myself."

When she put it that way, it completely made sense, and I liked it. I know from experience what it means to be consistently devalued by everyone around you in such an abusive chorus that you have little option other than to hate yourself and who you are. I of course turned out much different despite this abuse, because I chose to love myself and see myself as worth the best things in life even if others never shared this philosophy. So I get Dr. Smith...I get her a lot.

And just to be clear, Dr. Smith and I only share some similarities. I would never describe myself as a villain. But I think I'm perfectly honest if I believe (without remorse) that I'm not necessarily a "good" or "virtuous" person. There are plenty of people out there who try to put up a public facade that would convince others that they are "good, just, virtuous, etc." These are the role models of society, and I am so happy that they exist for others to idolize. I am not one of these people, nor do I strive to be. I am a gay atheist, which in some parts of the country is just above slime that pools in the gutter (let's be honest here). And I don't really care that some people view me as scum like that. I get along fine.

Additionally, I obey laws because the consequences of not doing so seem pretty terrible. I also provide help to people when asked, but I also have no problem saying "No," which can make people angry at me. And I'm not the kind of person who believes in self-sacrifice. Giving money away to beggars does nothing for me. It doesn't make me feel good or deserving of heavenly rewards. It just makes me feel like I lost money, and given the importance money has on our society, it actually feels like I made a mistake. That isn't to say that I don't give to charities. I cave into peer pressure like everyone else to avoid looking like the asshole that doesn't chip in for a co-worker who is sick, etc. And I donate to political campaigns occasionally with the idea that hopefully, someone will get elected that can make a positive change. But a hero I am not. That's just not in the cards for me. I'm just trying to survive out here...not trying to be a paragon of light to the masses.

Dr. Smith is very much like this too, and she has some incredible dialogue. She's essentially this somewhat craven and heavily traumatized person who was devalued all of her life, and she knows she can only count on herself to get by. However, she does make choices that I would never make. That being said, she's surrounded by people who (quite honestly) don't have to put in much work to look the part of a hero(by science fiction standards). They have love and support and respect from everyone, are incredibly smart and handsome/pretty, and they stumble into answers (which are caveats to the writing of the show). As a result, they are driven by very strong moral compasses because it works out for them and with a lot of social payoff. I've yet to see a situation that hasn't worked out for them, as they seem to be able to heroically overcome any challenge by just trying a bit harder. I'll speak from experience in my life that "trying harder" didn't work in a lot of situations I got stuck with in life, and I think the same thing can be said of the fictional Dr. Smith, which is why I relate to her on so many levels.

If anything, Dr. Smith just seems like a realistic portrayal of a flawed human being, and it makes the show incredibly interesting. The people around her have no idea what to do with her, because Smith is quite smart and knows how to manipulate people and how to be cunning. These are traits that the Robinsons in particular have no experience with, because (again) they just have to meet everything head-on, give a particular challenge all they've got, and as a result, they power through to a solution that leads to a happy ending.

I hope it gets renewed for a season three, and that the announcement comes soon.
Posted by Michael Offutt, Phantom Reader at 12:00 AM

Email ThisBlogThis!Share to TwitterShare to FacebookShare to Pinterest
Labels: Dr. Smith, Dr. Smith is the most fascinating character in the Netflix series Lost in Space and she reminds me a lot of myself, Lost in Space