Thus far 1917 is the best movie I've seen out of the 2020 Oscar nominations for Best Picture. 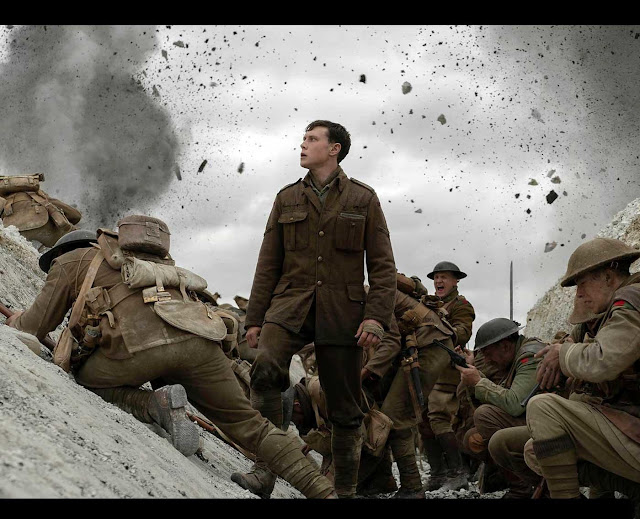 Since American Beauty came out many years ago, I've been a fan of film director Sam Mendes. I also share the opinion of many that Skyfall (a Sam Mendes film) is probably the best one out of the James Bond films. Even if you don't agree with me, I know it's a trophy for Sony Pictures, and it was only recently eclipsed by the Tom Holland Spiderman movies (at the box office). I think Mr. Mendes' secret weapon in filming is he likes to tell intimate stories, and he does so with a delightful and indulgent style that reveals aspects of a thing (the subject matter of the film) that we weren't able to see before, and it just sucks you into the story.

His latest outing on the film stage is 1917, which is a gory and beautiful piece of cinema. 1917 is uncomplicated, in that it's a relatively straight-forward story that shows an exhaustive linear timeline of two soldiers who have a very important task to do. It takes place on and between battlefields that few remember from World War I. I don't even think the names of the soldiers are that important. By watching the film, you become them, running alongside while ever wary from shots directed at you from the dark. By not knowing the main character's name until the very end, it might as well be you, just trying to survive and accomplish a heroic deed before it's too late, and before many lives are lost. The brutality and horror of war is unspared and uncut, which is probably why it got its "R" rating.

Those of you out there who are film buffs might also recognize that 1917 is filmed in one cut. It feels like "one cut" in this instance might be a technical achievement in that the scene unfolds without breaking from beginning to end in one long stream. You are there with the main character through every moment, even his walking, and you can see him respond to situations as needed and be completely overwhelmed by the events that are taking place. This very tight viewpoint takes us down into the trenches and we are now made the pawn in this horrifying game of chess, and see life exactly as it unfolds from the pawn's perspective.

The overall feel of the piece becomes surreal in moments, as horror can shift suddenly to the character becoming aware that he has entered a place of great beauty. There's a hallowness to these scenes, and the absolute chaos of the actual war makes little sense. In one scene, our hero pulls himself from a river, sopping wet and surrounded by falling cherry blossoms from a gorgeous orchard, only to pull himself onto the river bank atop dead bodies of soldiers caught within fallen tree trunks. Exhausted, and beneath these gorgeous trees, he starts crying. And that's when ghostly singing filters through the tree trunks. Someone...in all of this horror...is singing a beautiful song without musical accompaniment. The effect is haunting. You ask yourself, "How can all of this exist within the same place?"

I've seen a few of the Best Picture nominees. The ones I have left are: The Irishman, Ford Vs. Ferrari, Parasite, and Marriage Story. Quentin Tarrantino's film was good, however, among his films I think it ranks as the one I enjoyed the least. I can't see why Once Upon A Time could possibly earn him Best Picture this time around when others he created in prior years were far more deserving and failed at this task. JoJo Rabbit was excellent, however, it didn't cause "shock and awe," which is exactly what 1917 did for me. I do intend to polish up the Best Picture nominees before the Oscars air in February. However, I suspect that I've already seen the Best Picture winner. I guess we'll see.
Posted by Michael Offutt, Phantom Reader at 4:31 AM

Email ThisBlogThis!Share to TwitterShare to FacebookShare to Pinterest
Labels: 1917, The Academy Awards, Thus far 1917 is the best movie I've seen out of the 2020 Oscar nominations for Best Picture