Many writers are too desperate for Hollywood love. 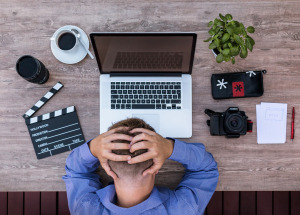 I recently finished Old Man's War by John Scalzi. I loved it. So I googled the series to see if there was any news regarding a made for television series, and I discovered Netflix has secured the rights to it, and that they are making it into a movie. John Scalzi (the author) wrote about it on his blog in an announcement that reassured fans that this adaptation of his work would be wonderful. Sure. Only in my opinion, it's going to fall far short. He really needed to tell Netflix, "No" and that it needed to be a ten episode mini-series.

In the book Old Man's War, the main character goes to enlist in an intergalactic army of humans from Earth who are engaged in an ongoing stellar war with various alien species. So in two hours time, we've got to see him enlist, take the space elevator into orbit where he meets several friends who become members of the "Old Fart's Club," bond with them, get transplanted into a new super human body (which he then has to grow comfortable in using), get training on various worlds, meet the Consu (a race of very religious super aliens), fight other species, meet his dead wife's body and have conversations with the personality inhabiting it, and then fight for control of Coral (an Eden-like world taken from them by aliens who eat humans for breakfast and are using Consu technology).

Every single one of the above events impacts the storyline. Even the fighting with other alien species who are not Consu and the alien Rraey (who attack the human colony on Coral) is important, because it not only serves to illustrate the main character's ingenuity in combat, but it also shows that the human race is using only one solution to interacting with the galaxy: going to war. This is an important and nuanced thing...that war is being over-used and that entire civilizations of intelligent aliens are being wiped out because humans need real estate and can't be bothered to use any kind of diplomacy.

It blows my mind that John Scalzi thinks that all of this can be done in a two-hour Netflix movie. And to cut any of that is going to change the story significantly. What we end up getting may be something similar to The Dark Tower movie adaptation (which didn't have the time to be faithful to anything).

And this happening to John Scalzi is not anything new. Look at Terry Brooks and the Shannara series. MTV made huge unnecessary changes to the storyline and shat out a tale that bore only fleeting similarities to the author's content. Yet Brooks went on record to defend the adaptation on his blog. Why? I think he was desperate for some kind of Hollywood love. I think Scalzi is too, which is why he gave a green light for a movie instead of bargaining for a Netflix series of at least 8 episodes.

Writers need to have more backbone and just stand up for their work with a big fat, "No! You can't do this to my work!" George R.R. Martin should have defended Game of Thrones against the showrunners, and said, "No, you cannot shorten the remaining seasons. We need time to show that Daenerys is transitioning to a mad queen or it will all go to hell!" But he didn't, probably because he was just overjoyed that HBO was doing such a good job (and spending so much money) on his work to make it look fantastic (which it did). He probably didn't want to rock the boat, which is understandable. Other writers are guilty of the same thing (of course). Anne Rice should have stood up for her works a couple of decades ago (especially with the awful Queen of the Damned adaptation).

I suppose if there are any writers out there who are reading my words, you might ask yourself what would happen if Hollywood came knocking to adapt your writing for the screen? Would you just let them do whatever they wanted as long as you got paid? Would you stand up for your work even if it meant saying, "No! You cannot do that to my story!" And I guess that some of this rant probably comes from a place of ignorance (on my part). I don't know what it's like to try and get a published work adapted for a screen (and I probably never will as I have no interest in that kind of thing at the moment). But even if this post falls on deaf ears, I want to say that I think many writers are too desperate for Hollywood love, and the world of entertainment would be a better place for all if they would grow a backbone and learn to say, "No!" But then, maybe we wouldn't get any adaptations at all. However, I think it's worth the risk.
Posted by Michael Offutt, Phantom Reader at 12:02 AM

Email ThisBlogThis!Share to TwitterShare to FacebookShare to Pinterest
Labels: Many writers are too desperate for Hollywood love