Saying one thing and meaning another makes the modern world a complicated place to navigate successfully. 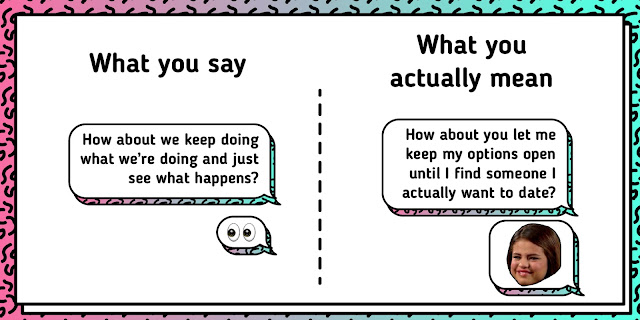 The modern world of the United States is growing increasingly more difficult for its population to understand, and a part of this has to do with the English language and how it's used to communicate. English has a lot of euphemisms in it. Complicating these euphemisms are lawyer-esque terms that people employ so that they aren't lying or guilty of a wrong. And then there are the terms that are co-opted as a marketing ploy that further dilute the meanings of the words that we say on an everyday basis.

Here's one example: I was recently observing a funeral held by some very religious people, and I was struck by how much grief there was present. Not that this is unusual, but... it did make me wonder why there isn't more jealousy and envy at a funeral. If these people are true believers, then the person who passed away is partying it up in the afterlife. They are with so many loved ones...gone basically through a doorway...and are on permanent vacation. Why wouldn't a single person in a hundred experience an emotion other than sadness? Answers: people are selfish creatures? People will miss what the person did for them? Funerals are not for the dead, but are for the survivors? I've heard the reasons. However, deep down inside I think the person may not be in a better place. In fact...there might not be a better place at all (I'm atheist after all). But could religious people share some of my doubt? If they did, then they aren't true believers (which is the very meaning of the word "doubt."). Then why put on a show that you are? It makes no sense.

These are the kinds of behaviors I'm talking about: saying you are one thing when in fact you are not. Let's call it "hypocrisy" for purposes of this conversation, though I don't mean to demean mourners. I merely want to illustrate how many of us say one thing, or label it, and don't actually mean it. This is confusing, and picking apart what a person actually means (from what they say) is a difficult task. It requires a person to "read between the lines." Just look at the above illustration that I put at the top of this post. How many people could actually suss out what the person on the left is actually saying? I'd venture "not a lot."

Want another example? What about other labels we use? "Yeah your son got approved for that unpaid internship. It's gonna look great on their resume." "Oh your daughter has a calling to run a daycare three days a week for four hours." "Can you volunteer to do this thing on Saturday?" In every one of the above instances...work is being asked...and no money is being offered in exchange for said work. There are also severe restrictions placed on a person's otherwise "free" time. Additionally, they might not be able to say "no" without the fear of some kind of social reprisal. I would argue that these "phrases" are just couched euphemisms for slavery, if the definition is "Unpaid toil with restricted freedoms."

In what other ways are people muddying the waters with language? Ever hear of the phrase "alternative facts?" What exactly does that mean? What about "Drain the Swamp?" I bet a lot of people are confused about the definitions of both phrases, and you won't get the same definition from two separate people. Along these same lines, I have a friend that says he's only been wrong four times in his life. If you try to point out a situation in which he was wrong, he might say, "I overestimated my time," or "You misunderstood me (which is gaslighting by the way)" or some other thing. Again...it's using language to confuse and misdirect.

And what about marketing? You go into any Apple store and they've co-opted the word "Genius" to mean something else entirely. I personally think that "genius" has lost any meaning. I saw on Facebook that someone labeled another as an "Archery Genius." What does this even mean? There are "musical geniuses," "creative geniuses," "archery geniuses," "Apple Geniuses," and the list goes on and on. I think people just like attaching the word "genius" to things to say that someone is skilled at a thing. But why not just say: they are skilled? Why ruin a perfectly good word?

Anyway, I think our modern world is already complex. But the language in which we use to communicate has grown increasingly more difficult to identify a thing properly. The confusion generated by this is already reaping negative consequences, paralyzing people with inaction or anxiety, or leaving them open to exploitation. I wonder where it will all end up when what we say does not resemble what we mean in any shape or form.

Thoughts? I look forward to your comments.
Posted by Michael Offutt, Phantom Reader at 12:00 AM

Email ThisBlogThis!Share to TwitterShare to FacebookShare to Pinterest
Labels: say what you mean, Saying one thing and meaning another makes the modern world a complicated place to navigate successfully