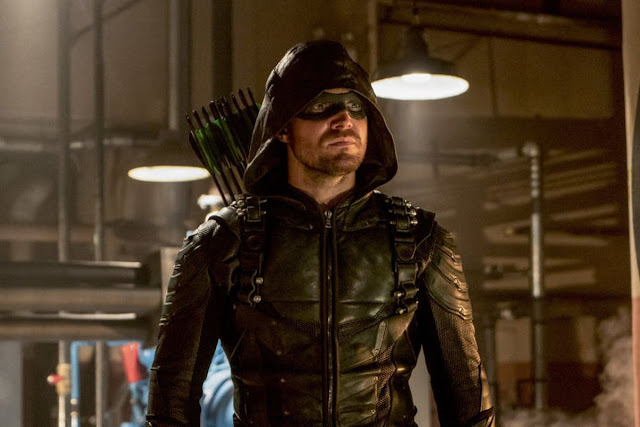 I've enjoyed Arrow, but the last few seasons have not been as good or as fresh as the storylines it used to tell. Oliver Queen got a kid, and there was a lot of drama about that. They switched to fast forwards instead of looking back on the island (which was a running theme for so many years of the show). But the old switcheroo was kind of jarring for me, and it still is. I guess there are no more good stories to tell in Oliver Queen's past. And Felicity Smoak's character has evolved in ways that I didn't really like, as did Diggle's. And then all the secondary characters just kind of took over somewhere in all that mess. I mean, there was an entire show a few weeks ago that didn't even feature any of the main characters. I was like, "Who are these people and why should I care about them?"

Good shows need to end. When they don't, it's kind of like they sacrifice all dignity for the sake of a money grab, and everything seems so drawn out and not fun. Supernatural became this for me around season 8 (so I stopped watching). The Walking Dead reached this point with me early in this season when they abandoned Rick as a main character and he wandered off to the discard pile.

So yeah, I'm glad Arrow is ending. I'm not so glad that Emily Bett Rickards (she plays Felicity) posted that she won't be back for the last season of the show. It feels very much like what happened with Star Trek: Deep Space Nine, when the actress who played Jadzia Dax decided not to renew her contract, and the showrunner decided to kill her character off and replace her with Ezri Dax. That change (for the last season) forever left a sour taste in my mouth regarding Deep Space Nine, even though I do enjoy watching reruns of it on H&I here in Utah. I mean...the wedding episode of Jadzia Dax and Worf was so spectacular, and that barely happened when they abandoned the character. What a waste.

So yeah, I'm glad Arrow is ending. I just hope it doesn't spell doom for the other CW shows. I rather like Legends of Tomorrow and The Flash. And we are getting a Batwoman series, which I think will be rather interesting. I wonder if the League of Shadows will make an appearance in Gotham City. Personally, I think the League of Shadows was the most interesting aspect of Arrow, and they kinda went downhill once they abandoned the Ra's al Ghul storyline. It takes a good villain to drive a good story, and the League of Shadows does that in spades. I guess only time will tell.
Posted by Michael Offutt, Phantom Reader at 12:01 AM