Game of Thrones cleverly showed us already that the Night King is not at the Battle of Winterfell.

Brandon Stark as the Three-Eyed Raven says that the Night King will come for him in the Godswood at Winterfell, so everyone believes him because he knows things. But the Game of Thrones series has already showed us that the Night King has flown south to destroy King's Landing on the back of Viserion, and there's nothing that King's Landing can do to stop it. When did they show us? A couple of places.

The first was in season two when Daenerys was in the city of Qarth in the House of the Undying. Here's a screen capture of the steps to the Tower where Daenerys's dragons had been taken by a necromancer named Pyat Pree. 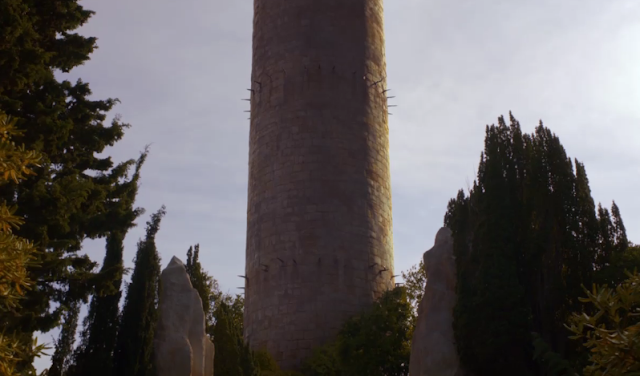 When Daenerys entered that House to find her dragons, she was given several visions that up until about last night at 11 p.m., I'd assumed meant other things. And yes, I literally woke up and thought, "Oh my god...that's what that vision meant." I'm such a nerd, right? So in the vision, snow is filling the throne room and blanketing everything, and she's in kind of an awe about it all. A lot of people thought it was a metaphor..."Snow" meaning that "Jon Snow" would be sitting on the throne. But I don't think it was metaphor at all. It signifies the coming of the Night King to King's Landing to kill everyone and raise an army of a million dead. 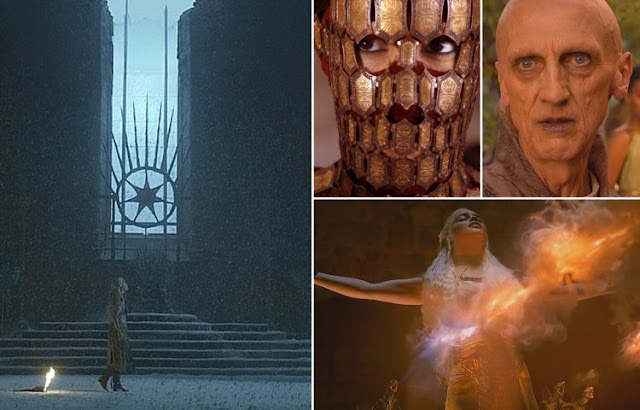 If this weren't proof enough, there have been other, stronger hints. Bran had a vision in season four (I think) where he saw a dragon flying over King's Landing. I'll include the screen capture below for reference. I think all of us just thought that this meant the coming of Daenerys...that it would be her flying her dragons over King's Landing. This is a simple thing to predict. But the ominousness of the dragon's shadow seems to suggest that all of us probably misunderstood it at the time. It's not Drogon, but Viserion, carrying none other than the Night King on its back. 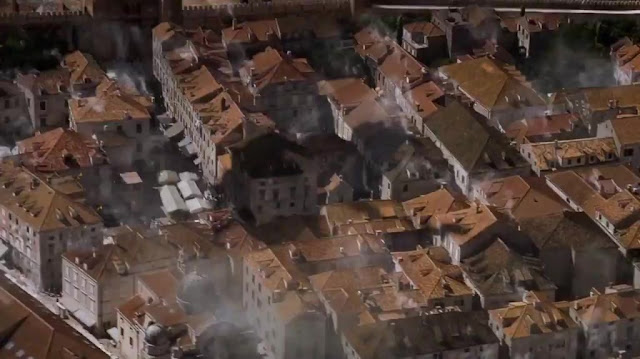 King's Landing is going to get completely destroyed either in episode 3 or 4. I expect there to be a dramatic cutaway to it as the surviving heroes of Winterfell look at each other and ask, "But where is the Night King if he wasn't with this army?" Where, indeed.
Posted by Michael Offutt, Phantom Reader at 12:00 AM