The record-breaking premiere of Game of Thrones season 8 set up the war to end all wars. 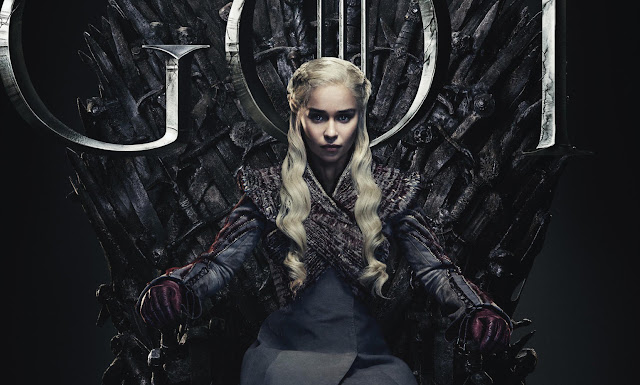 So the long awaited return of Game of Thrones happened last night. There was a lot to unpack, and as predicted, record numbers of people tuned into the premiere. I saw one estimate that as many as one billion people worldwide were going to watch the season 8 episode 1 premiere through as many means as possible. That's a mind-boggling number, and it just reinforces in my mind how big this thing really has become. Everyone is talking about it...I myself hosted a Game of Thrones BBQ in my backyard before the premiere where we all wore Game of Thrones t-shirts and other memorabilia and my friend Farrah showed up with her daughter named "Arya" (and yes she's named after the character of the same name in the show). I wonder if George R.R. Martin ever foresaw how big his creation actually was going to be.

As far as the episode itself went, it was pretty typical of season openers which are usually "slow" and which focus around some housekeeping, getting characters together, and doing their best to tease the rest of the season. As it goes, I've never seen a first episode of any season of this show that 1) was very exciting and 2) left me satisfied in any way. First up there was a new introduction that put front and center the shattered wall, and then did its best to paint the momentous events and high stakes leading up to the iron throne.

With only five episodes to go, its a dramatic change to the introductions of prior seasons, which (more or less) just did a flyby of all the locations in which major characters and their narratives took place in. Then we saw Daenerys getting a bit of the cold-shoulder along with Jon Snow, mostly because the North had just crowned him King in the North and he gave it away to Daenerys Targaryen in order to guarantee her support. This is mostly due to the fact that for nearly all of them, the threat of the Night King is not real yet. But as the episode unrolled and the fortifications around Winterfell went up, it seemed to me that it started to get real for everyone as it was clear to anyone with eyes that this was going to be a battle that might decide the fate of all mankind.

And I'm kind of concerned that Winterfell might just end up being that. They should have some kind of fallback, someplace they can go back to if the Night King proves to be too cunning and his army too invincible to just take on all at once. In my head, I was thinking that the fight was going to eventually end up at King's Landing (which is a good deal south from Winterfell...about three months journey if I remember correctly). If they spend four episodes leading up to the battle of Winterfell, and then have the fifth and sixth episodes being the battle of Winterfell and then the series finale, I think I will be just a little bit disappointed. Winterfell really isn't all that far from the wall. The Night King should make it further than Winterfell, especially given the size of his current army. I also felt that maybe one big battle would take place in the Eyrie, since it was a fortress that was designed never to be taken.

The episode also treated us to more of the dragons. Jon Snow got aboard Rhaegal and flew him through a canyon while Daenerys watched him from atop Drogon. That was kind of cute and terrifying as well. A little joy before all the darkness descends is a nice thing to do. It reminds us that both of these people would make great inspiring leaders, and that there is a lot of beauty in the world of Westeros that is worth fighting for. Then the reveal that Samwell did when speaking to Jon Snow in the crypt regarding his lineage was something that Jon wasn't (at first) prepared to accept. But with the dragon flight out of the way, you could see that the ways in which Daenery's dragons responded to him had started to make sense. They know he's a Targaryen. I still look back on that reveal (and secret) in awe. George R.R. Martin wrote probably the greatest secret into these books that I've ever seen in fiction. Well done, George. Well done.

And last but not least, there's Cersei doing terrible things as she always has done. She's ordered Bron to kill both her brothers (I wonder if Bron will go through with it as he's rather fond of both). Cersei has got The Golden Company now (but no elephants). So she's got the greatest mercenary army in the world on her side. I think her greatest failing is that she continues to play the Game of Thrones when none of that even matters as long as the Night King walks the earth.

Oh, there's so much to think about. I can't wait for the remaining five episodes.
Posted by Michael Offutt, Phantom Reader at 5:41 AM

Email ThisBlogThis!Share to TwitterShare to FacebookShare to Pinterest
Labels: Game of Thrones, The record-breaking premiere of Game of Thrones season 8 set up the war to end all wars