Here is my idea regarding the weird White Walker spirals we've been seeing for eight seasons now. 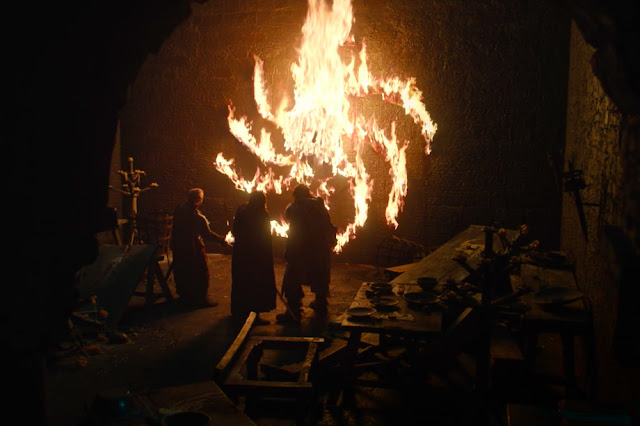 In the premiere episode of season 8 of Game of Thrones that aired on Sunday (it was called "Winterfell") we viewers got treated to yet another gruesome spiral of hacked limbs that was obviously created by the White Walkers. We know from previous episodes that the White Walkers (or the Others as they are called in the book) are 1) intelligent, 2) originally created by the Children of the Forest who wanted to use them to protect themselves against humans (but eventually they lost control of the White Walkers) 3) have magical powers, and 4) apparently are not too different from the race of humans they were created from. They ride horses, utilize tools (like chains), they wear clothing that is designed for them (and it isn't all nasty so this implies a cleaning regimen), and they are trained in swordplay.

So (thinking like a writer), I started asking myself what the significance of the White Walker spirals might be, and I decided that they might be a way for the White Walkers to create a latitude of consecrated ground (thinking that the power comes from a divine source) where they can bring the full force of their powers to bear. In other words, they might not be able to cause the dead to rise if they don't create one of these things, which may be an homage or sacrifice to whatever god that they worship (the Great Other?). And before you go on and accuse me of reading too much into this, both in the books and in the show, it has been pointed out that there may be only two gods that actually have any power on Westeros. The first god is R'hllor, who is a god of fire, and the second is the Great Other, who is a god of ice. And the series which includes the title book, Game of Thrones, is in fact called A Song of Ice and Fire. I'm even positing that the Night King is the High Priest of the Great Other, and that the White Walkers are also priests of a sort to their religion. Additionally, "White Walker" may be a kind of mantle that is assumed by those who worship this religion. In other words, the way new White Walkers are created is through a kind of infernal baptism...a touch by the High Priest...in what looks a lot like a ceremony.

And having now said all that, what do you guys think? Thoughts on White Walkers actually being priests? Anyway, lest I digress...

In the pilot episode that aired many years ago, one of the rangers investigating Wildlings north of the wall comes across a similar gruesome display made with hacked limbs (I'm positing that this is the first of many sacrifices made by these "priests"). It's after this event that the dead rise. So, it makes me think that the ground needed to be consecrated (by forming that symbol) in order for the White Walker present at that area of the map to call upon the necessary powers to make its own zombies. Similarly, another gruesome circle was found at the Fist of the First Men, which probably incorporated all areas of that latitude to enable the White Walkers to make the dead walk again. Once they went south of the wall, there weren't any fresh bodies to create a new symbol with until they reached Last Hearth. So having killed all the living there, a new spiral was ordered by the Night King and once it was done, they raised all the remaining dead to join their army. Nailing the Umber boy to the wall seemed more like a narrative piece, to throw us viewers a bone by having one of the men in the hall say "That's the Umber boy" so that we 1) understand the Umber boy did not make it back to Winterfell and 2) identify the castle they are in as Last Hearth.

We may never know if I'm right regarding this particular guess, but I think that as the White Walkers travel south, there will be more of these markers as significant points of latitude, and that they are done to consecrate that southern point with the full powers of the White Walkers.

Anyway, that's my idea. What do you think?
Posted by Michael Offutt, Phantom Reader at 7:05 AM

Email ThisBlogThis!Share to TwitterShare to FacebookShare to Pinterest
Labels: Game of Thrones, Here is my idea regarding the weird White Walker spirals we've been seeing for eight seasons now, White Walkers