I want to talk about the black hole the world saw this week. 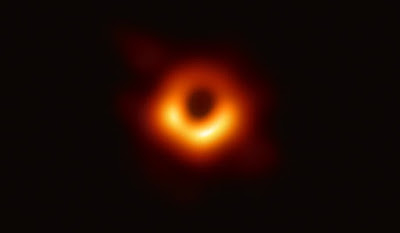 When I saw the black hole image that scientists finally pieced together using brain power that I cannot even comprehend, I felt a moment of awe. It reminded me (briefly) of the one in Interstellar, and it also made me think about just how puny I am in the overall scope of our universe. It's also terrifying. Terrifying to comprehend its existence. Terrifying to think about this thing, which is apparently pretty common in the universe, and which the human race will probably never have the capacity to understand (as all physics kind of break down beyond the event horizon).

My co-worker summed it up pretty well when he looked at the picture of it. He said, "I wonder where it goes?" At first, I thought that I knew the answer to that question. My brain raced to think that it's just this huge conglomeration of matter where gravity is so powerful that even light can't escape it. But then I realized that this is only the beginning of describing what it is. It could very well "go somewhere." From people much smarter than me, apparently (if you could survive the blistering conditions present at the event horizon), you could survive the gravity there rather easily. It's only after you cross the point of no return that you begin to spaghettify...and where time (apparently) bends to a point where it completely stops. If time can be bent like this, why can't space itself? I guess they are one and the same thing? So my co-worker saying, "I wonder where it goes?" is probably voicing a reasonable question. It may go nowhere...or it could go to an entirely different universe. Or it could just kill you, like a lot of other things do in this universe. Contemplating what a black hole is seems to be like trying to wrap your head around the question: what happens to us when we die?

In the picture above, the dark spot in the middle I guess is filled with light, but it's light that has checked out of our universe. It's taken the permanent exit and gone somewhere else because of something called a singularity that exists at the middle and possesses infinite density. I guess Einstein experienced fear of a sort when his equations led him to posit the existence of these things. He was a really smart guy, which is something I think about when I experience fear as well.

It's incredible I got to see something like this in my lifetime.

How about you? Did any of you feel anything when you saw the image for the first time?

Posted by Michael Offutt, Phantom Reader at 7:38 AM

Email ThisBlogThis!Share to TwitterShare to FacebookShare to Pinterest
Labels: I want to talk about the black hole the world saw this week, It's Science