What it's like to live with obsessive compulsive disorder. 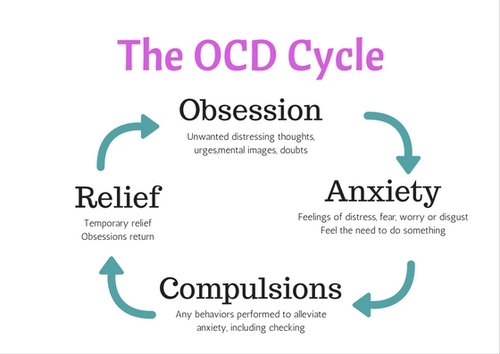 I have obsessive compulsive disorder, but much like autism, there's a spectrum on how it manifests. For me, I become obsessed/compulsive with cleaning, with fictional characters, with inventory, with random thoughts that never seem to end but just cycle and cycle and cycle for hours (and even days) on end. I can close my garage door, turn a corner, and then have to circle back just to make sure it's closed. I can check a door two, three, or four times to make sure it is locked. I can wash my hands over and over. It's a strange thing.

In my day to day life, if someone leaves a mess in my house, I am compelled to clean it up no matter how exhausted I am. If I start to draw something, I can become obsessed with it. I lose so many hours concentrating on one thing that I forget what time it is and a whole day flies by and I work myself to exhaustion. I can become obsessed with fictional characters and write and write and write until I reach a point that I hate all of it and just need to step away for a long time in order to feel right with the world again. But it's difficult to reach that stepping away point. My brain tumbles over and over on thoughts for seemingly no reason...details that plague me until the wee hours of the morning.

If something stands in the way of my obsession I can become irritable or even angry. It's difficult for me to let things go. For example, if I went on vacation, and the thought that I might have left the stove on somehow enters my brain...and I didn't know anyone that could go and check for me that it was turned off to reassure me...it would ruin my whole vacation. That one thought...that one thing...would destroy any fun that I could possibly have. My mind would turn on that one detail to the point of...obsession. Insane obsession.

Having OCD means that I am the butt of jokes. People snicker around me that they can just leave something messy, because they know I will eventually have to clean it up. I am compelled to do that. People will take advantage of me at work because they'll automatically assign the management of a huge database to me because they know no one else will do as good a job because I will obsess over each item. They don't care that it's stressful. The easier jobs will go to someone who doesn't have O.C.D., who has shown that they are "normal" and in other words...don't really care and won't do a good job because (again) they don't care.

Living with obsessive compulsive disorder means that people who do genuinely care will tiptoe as if walking on eggshells around you. They know if they mistakenly put something out of place that it will bother you. That you will have to correct it, and your compulsion to correct them makes them irritable because no one likes being corrected. But you can't help it.

Like most mental disorders, there are good things about having obsessive compulsive disorder. I'm very organized. I can find records that go back decades because I know exactly where they are. I manage money well (almost to a fault). I could tell a person exactly how much something cost or how much they were spending on a certain thing because I keep track of it on spreadsheets. Over time I've tried to break my obsession with perfection. I had a dent in my wall that I filled in with spackel but didn't paint for over a year. I did that on purpose. Every day I looked at it as a challenge not to cover it up. It was a challenge to myself: I dare you to leave this glaring mistake on the wall for all the world to see. Leave it there and don't fix it. Let its imperfection be a contribution to your home.

Chaos bugs me. Before I started writing this blog I was out in the yard raking up all of the leaves that blew on the grass from the neighbor's ugly towering poplar trees. Now there are a few more on the lawn, and I can't stand them. So even though I'm tired and just want to read a book, I'm going to go outside and pick all of them up. Every single one, and then throw them in the garbage.

Some people say living with obsessive compulsive disorder is a good thing. It's not. I wish my brain was normal, and I wish it didn't obsess on things. But it does, and that's just the truth of it.

Email ThisBlogThis!Share to TwitterShare to FacebookShare to Pinterest
Labels: the OCD cycle, What it's like to live with obsessive compulsive disorder