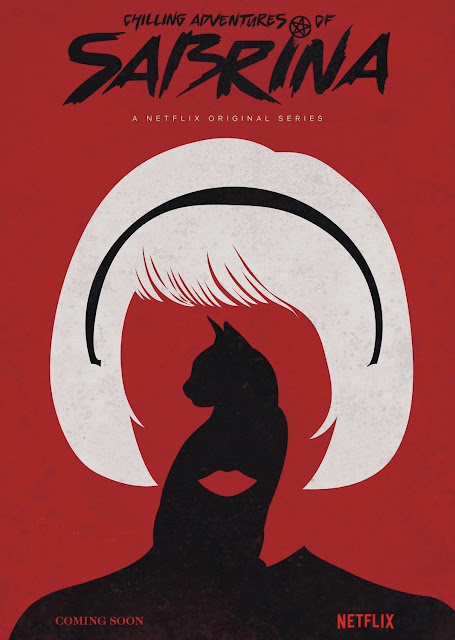 The new trailer for the Chilling Adventures of Sabrina is now out, and as expected, this Netflix series is based upon Sabrina Spellman, a teenager turned 16 who now must decide whether to sign the Devil's book and become a Bride of Satan. It comes out in late October (the timing is perfect for Halloween). It's also in the same universe as Riverdale, which airs (in America) on the CW, but I guess everywhere else is branded as a "Netflix Original." As a note, I think this is odd, but whatever.... And yeah, I'm in the boat that hopes Riverdale and Chilling Adventures of Sabrina do crossovers. These characters need to interact.

I'm also going to take the time to make a point about witchcraft, not that I'm an expert or anything. But exposure to people that call themselves "witches" because I have friends that practice polyamory (more than one love) over here in Utah (I am not one), I've been exposed to my fair share of tarot-reading, astrology-spewing, and crystal purifying women. I have been educated on "witch" versus "wiccan" and that many people get it wrong. So to your delight, I'm going to pass on what is said to me...to you.

Witches are fictional characters imbued with magic powers that are often associated with demonic or otherwise forbidden powers. They are found in the myths, legends, and fiction of countless cultures across the globe.

Wiccans are real life practitioners of religion created in the middle of the 20th century. Inspired by European paganism, this religion is definitely Western, and its found especially in Britain and in North America. They perform rituals and even sometimes claim to be able to cast spells, but their powers are no more a proven fact than that of any Christian faith healer (which is to mean zero or zip).

Witches and Wiccans are NOT the same thing, and a show depicting witches is not an attack against or a representation of Wiccans. Yes, Wiccans like to call themselves "witches," but that claim does not retroactively make every story ever written about witches to be about Wiccans. Witches as a concept are independent from Wicca.

And honestly, I have no idea why they do call themselves witches other than to elicit a kind of "edgy" (read as unique) factor similar to putting on black and eyeliner and going to a goth club. It's even better if you can get people to sympathize with your persecution while you clamor for universal acceptance for all.

So there you have it...consider yourself educated :)

Posted by Michael Offutt, Phantom Reader at 7:40 AM

Email ThisBlogThis!Share to TwitterShare to FacebookShare to Pinterest
Labels: The Chilling Adventures of Sabrina has a trailer now just in time for Halloween, Wicca, Witches