Civility is just a form of gaslighting that we need desperately if we expect society to thrive. 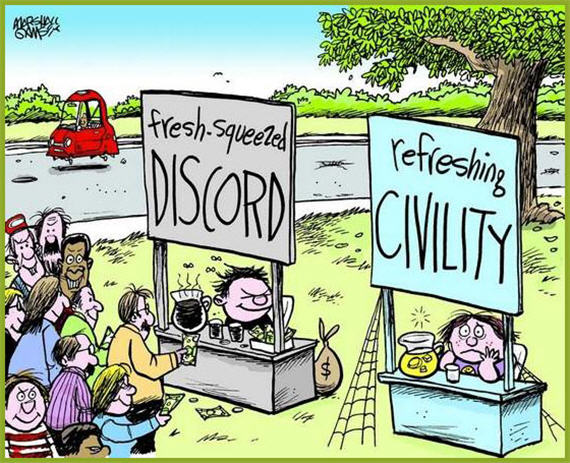 There are days when I wish that I lived in a world where people just told it like it is. But living under a president that (arguably) does just that (an example would be some of his personal observations about Rosie O’Donnell) and seeing the reaction in people from Trump speaking like that, makes me understand the need to keep all the garbage hidden from the world under a nice-looking sheet. The problem (I think) is that telling it “like it is” has a chain reaction with other people. If, for example, you say on Tinder, “No Blacks,” then this kind of racism (even though the profile person is letting people know that they are a racist and that’s how they truly feel) emboldens others who feel that way too, and then they start saying it.

Additionally, as much as people like to believe that they think for themselves, there’s plenty of evidence that points out exactly the opposite. For example, we all know that good reviews (even fake ones) tend to generate sales and positive buzz. When someone says “this tastes good,” and you’ve never tried it, you have a greater percentage chance of agreeing with that person especially if you view them in a positive light. People are not machines. We form biases based on our relations with others and the people we spend time with. Because of this fact, we need civility if we are going to have a functioning society. In other words, as much as I don’t like it, I think we need a clean pristine sheet of lies to hide all the garbage under. One might say, “Please ignore the smell, just focus on the sheet. Look how pretty and nice it is.” And so it goes.

I recently got into an argument about just this thing on (of all things)…Facebook (social media may be the vehicle that destroys civilization folks!). Try to hide your surprise, and of course I couldn’t keep my opinions to myself. My Facebook friend, Ben, posted a meme that purported the following:

“Women do not have to: Be thin, Cook for you, Have long hair, Be feminine, Be graceful, Have sex with you, Shave, Diet, Be fashionable, Wear pink, or Take any B.S.” Posted on the meme were a bunch of cartoon fists that had their nails painted. It was also on a pink background.

Artistic choices aside, my friend Ben posted this because he wants to tell women out there (he’s single and looking) that he’s a nice guy and that these are his values. Only, I know Ben, and I don't think that these are his values. Here’s just one point I want to make: Ben likes thin women and won’t date or have a romance with fat (obese) women. He derives a self-esteem boost from associating with thin young women (so do a lot of guys to be honest). So he’s got an inherent bias already that would affect his judgment were he a hiring manager. And I’ll just stop there because in just that one sentence, he does not ascribe to the behaviors that he posts in his online meme.

As it stands, this meme is already a public service message, a “Do as I say and not as I do” message for sure…but one that’s there for “the greater good” whether or not you even care. There’s a word for this: hypocrisy. But I don’t think Ben is to blame for the many hypocrisies of the modern world. Society on a deep level (beneath its shallow veneer) doesn’t ascribe to the above message in the meme (at least not in the United States). To put it another way, it’s the white sheet over a hot mess of garbage. But we need this kind of civility…the quiet “nods” that this is the appropriate thing to say…even if our behaviors dictate otherwise. To do anything else, is to invite anger, violence, or possibly even war. These are the things that make a society collapse under its own weight. Nobody wants that. And who knows? Maybe if a positive message is repeated to people at a young enough age, they will not grow up to be assholes and actually believe it! That's how you change the world for the better, folks. So there is hope.

Of course, those of you who know me from this blog, also know that I couldn’t leave well enough alone. So I posted this in response to Ben’s meme:


“Ben, I think your heart is in the right place when posting a meme like this, but I think (ultimately) if you point some of that high-powered perception you possess at yourself, you will see that the messages of this meme are idealistic and ultimately, one big lie.”

He followed up with a comment asking me to explain my point. So I continued by saying, “Let’s finish the meme with some words I’ll borrow from a friend that expresses what I’m saying really well”:

Without assistance from anyone else.

You’ll have to do it alone.

Average people believe they have the freedom to not conform, and they do this while holding the expectation that the difficulty level of their lives WILL NOT CHANGE. But in reality the difficulty does change. Your path gets harder and harder, approaching infinity. And you’ll find barriers all over the place because doors have closed on you that should have remained open.”

People started to attack me with their straw man arguments (and I expected as much). One woman laughed with an "LOL" and said, “Pick up a history book, dude” and another woman just reiterated what the meme said and added, “I think what this meme is trying to convey is that women are tired of the double standard.” None of their comments are useful, because all of their anger was directed at me for daring to lift up the sheet and point out the smoking pile of hot garbage underneath. Just to clarify, I'm a supporter of the messages in the meme. I just don't think they are true of Ben or many of the people we call neighbors on this wonderful blue marble of ours that we call Earth.

Eh…I relish these opportunities to tilt at windmills.

But if anything, I’m even more firmly convinced that society needs to be gaslighted...the people need their little white lies. They need to be told that "you are beautiful" and "everything is going to be okay" even if neither of these things are true. It's like the white lie told to children that goes, "You can accomplish anything if you set your mind to it." A thriving society needs people to believe that you don’t need to be thin to find happiness and joy. You don’t need to conform at all and your path through life will be just as easy as if you did. Yadda yadda, good day, and God bless.

I’ll buy that for a dollar.
Posted by Michael Offutt, Phantom Reader at 12:05 AM

Email ThisBlogThis!Share to TwitterShare to FacebookShare to Pinterest
Labels: Blogging, Civility, Civility is just a form of gaslighting that we need desperately if we expect society to thrive, gaslighting