Anyone who claims to have the moral high ground over anyone else in society is grossly unaware of their own shortcomings. 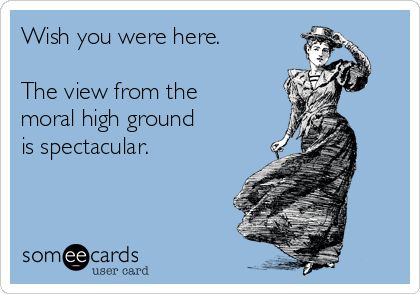 The annual event "Burning Man" is happening right now in the desert of Nevada. I know a few "burners" and they are nice "civil" people of privilege who don't realize their privilege. It's a weird thing to view humanity through a lens like this, but my brain goes there in thoughts that turn around and around in my head. Too often I conclude that pretty much all people on this Earth suck for one reason or another.

Take "burners" for example. These are people who like to go to festivals like Burning Man, and they preach among their values "radical inclusivity." Okay...sure. You are radically inclusive to all able-bodied people. Disabled people? Not one bit. If you are disabled then you are on your own if you are at this event, much less getting to it. The art that is displayed, especially if it is meant to be climbed upon or if it is meant to be enjoyed physically in some manner is probably not going to be handicapped accessible. The organizers of this thing that preach radical inclusivity should start another one in the middle of the Amazon or on top of Mount Everest. They could say, "We are radically inclusive." Then someone like me would reply, "But how can you be inclusive if you are at the top of Angel Falls in South America?" Then it would afford them the opportunity to smile and reply back to me, "If you get here...we are inclusive to you. But it's not our fault that you can't deal with the natural terrain. That's on you."

"That's on you." There's a quote for you that I've heard too much. "Pull yourself up by your bootstraps." "Take responsibility for your own shortcomings." There are all kinds of ways to express this sentiment, but in any re-wording of this sentence, I never reach the words "radically inclusive." It's disingenuous at its very core.

Another thing that people like to own are positive virtues. Somewhat like the Dunning-Kruger effect, which is a study that showed people grossly overestimate their own competence in doing things, people overestimate (or lay claim to) positive virtues that they don't actually possess. For example, here's a conversation to illustrate this point:

"I am a compassionate person."

"Wow...okay...well here is my quadriplegic patient. Every day he's going to need to be fed three times, meals will be in the fridge over there. You will need to spoon feed him and give him a drink of water from this special mug here and then at three o'clock, he needs to have his leg bag drained of urine. If his hose gets tangled on his nose, you'll have to straighten out the tubes..."

"Oh I'm sorry, I can't do that," the person replies. "I'm compassionate but caring for that gross fat quadriplegic person is something I can't do. There's the smell and stuff...I can't deal with that. But if you need hugs I'm ready."

I look at them, "Oh...I thought you said you were compassionate."

"Compassionate yes, but I have boundaries. Truthfully, I just want to hang out with the pretty people and be called pretty. I don't want to deal with that. It's a downer."

Sure...that's a conversation that takes place in my head, but I have no doubt there are thoughts that run through people's skulls that go exactly on these lines. I (for one) do some care-giving of a person in a chair and have experienced tremendous difficulty getting other people to care for him when I am not available. And one of them did say she thought he was gross (just being honest) and told me that she would rather not be asked ever again. She also claimed that she was "compassionate."

So here's the thing: people on the left of politics and people on the right of politics both suck. In fact, there's a lot of people who suck. Events like Burning Man co-opt phrases that are outright lies. People who claim to be compassionate have so many boundaries that they might as well say, "I'm compassionate to person A and person B and in situation C but anything outside of that is a flat out 'No.'" And I include myself in this too. I have plenty of boundaries. I guess the point of this post is that the older I get, the more I begin to have a distaste for any person or agency that wants to claim the moral high ground in anything.

Email ThisBlogThis!Share to TwitterShare to FacebookShare to Pinterest
Labels: Anyone who claims to have the moral high ground over anyone else in society is grossly unaware of their own shortcomings, Burning Man