Alien: Covenant comes out May 19th. It's less than a month away, and I'm not ignoring all the love from Twentieth Century Fox. If you don't know, the studio's been releasing (ahead of the premiere) lots of promotional materials that include pictures and videos related to the film. One of the more serendipitous finds that came out was a walk through of the Australian set for Alien: Covenant done by former Myth Buster's engineer, Adam Savage.
If you watch the short clip, you can see how Adam gets totally sucked in by the details of the alien ship that Dr. Shaw and David the robot (from Prometheus) use to pilot the vessel to the home-world of the Engineers (I'm guessing that's what the photos released by 20th Century Fox are showing when they give us images of the ship that Shaw's piloting, rotating in the air and docking with a much larger vessel). I've included a still of that image below so you can see what I'm talking about (fans are calling the other ship "The Scorpion" because of its tail-like appearance). 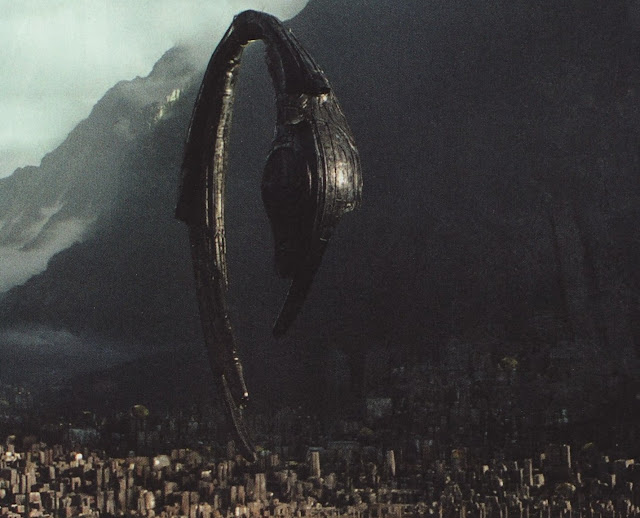 Below the ships is some kind of city, obviously not populated by humans but by Engineers (the tall muscly beings from Prometheus). I love how all of these images appear so awesome...in the true sense of the word. In other words, they inspire "awe" in me because they don't look like anything that I've ever seen before. 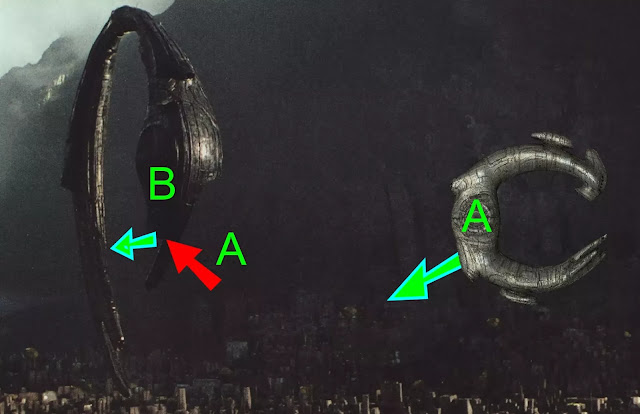 I think that if I were lucky enough to be in the same situation, I'd be just like Adam. That is, in a state of wonder, looking at the carefully designed set pieces in Australia and just allowing myself to drown in this world that Ridley Scott envisioned decades ago and brought to life alongside H.R. Giger. Just look at the attention to detail in the video, all the controls on the console, the pilot chair designed for the much larger Engineers, and the space suits and ribbing along the corridors. This is A-list treatment and production values applied to a fantastical science-fiction story. Below is a short that includes a lot of details from the ship, and bridges the gap of time between Prometheus and Covenant wherein we learn some of the fate of David and Noomi Rapace (Dr. Shaw). I expect that these are part of the main film, and it's a joy to watch.
I've thought about H.R. Giger quite a bit these last two weeks, not only spurred on by Covenant's impending release, but because I wanted a simple print of one of his well-known alien works (to get framed at some point) to hang on my wall in my new home. But good lord are they expensive, and it's not like I'm buying an original. This is just a photographic print, and they are definitely not in the "affordable" range unless you want one that's no bigger than a small plate. I suppose I could get something H.R. Giger-inspired, but it's not the same thing.

To clarify, nowadays there's lots of copycats for the late H.R. Giger's work. And the artists that are "Giger-inspired" definitely know how to draw as well as he did, but they don't possess any of his genius. People that have transformational ideas only come around once in a generation it seems (if we're lucky). Aside from Giger, two that I can think of that created the kind of transformations that inspired copycats galore are Kurt Cobain and Steve Jobs. These are by no means the only ones, but you can at least understand where I'm coming from and get the gist of how important I think H.R. Giger was as an individual.

Is there anything wrong with a knock-off? Of course not. But it doesn't inspire love, you know? We see this in genre writing all the time. Fantasy is replete with Tolkien and Martin knock-offs, because people develop this urge to consume more and there's only a finite amount of stuff to consume.

It got me thinking about the nature of reality, and how I make assumptions all the time that people share my same reality. Maybe this is wrong though. I can never be sure, right? Earlier this week when I was at work, the janitor came through the door as I was watching the front desk. Where I work, there's a front desk office, and at the time, I was the only one there. When the janitor pushed his garbage can through, he stopped, looked at me, and asked, "Are you watching the front desk?" My first instinct was to think, "Why would he ask that when I'm the only one here? Isn't it obvious I'm watching the front desk." But then I thought...maybe he sees a different reality. I can't just assume that he's in the same reality as me. He could be seeing three different people here, and he may just be asking me to validate that I'm the only one here so that he could be more firmly anchored to the reality that everyone believes is the real reality.

So I answered his question, "Yes, I'm the only one watching the desk."

And I saw a little relief in his eyes as he went about his work. You know...the kind of relief that someone gets when they ask for affirmation about something, and they get it. The whole experience was kind of mind opening.

So then I started to think that maybe transformational geniuses like H.R. Giger, Kurt Cobain, and others aren't really part of the reality that you and I take for granted (if you and I even exist in the same reality to begin with). When you start to think like this, then you realize that what those people saw was probably normal for them. In a way, through their art they were just able to share that other reality with us in ways that we felt alien, but allowed us to grow creatively in an entirely new direction.

Maybe that's the whole point of art, and a true artist is someone that lives in another realm and just visits those of us that live in the most common realm some of the time because everyone's reality is just a little different from our own.
Posted by Michael Offutt, Phantom Reader at 12:08 AM

Email ThisBlogThis!Share to TwitterShare to FacebookShare to Pinterest
Labels: A true artist is someone that lives in another realm and just visits those of us that live in common reality some of the time, Alien Covenant, H.R. Giger, Kurt Cobain