What is the Bottle City of Kandor? 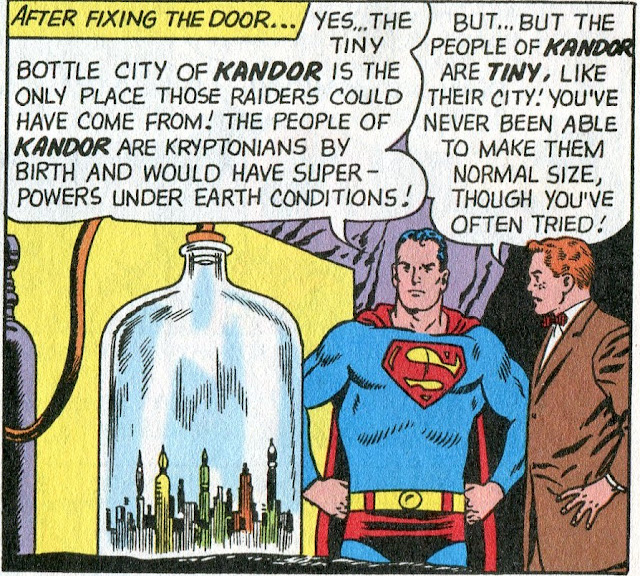 If you watch Big Bang Theory, or read comic books, or are any kind of fan of Superman, you may be familiar with the bottle city of Kandor. It has a unique look. Imagine a city in a glass dome, and I'm including a couple illustrations of it in this post so that we can all be on the same page for the discussion of what it is exactly. Because, I'm sure you wanted to know.

Kandor is the name of the former capital city of the planet Krypton, and it is best known for being miniaturized and then stolen by the supervillain Brainiac. When Superman recovered it, he basically stored it in the Fortress of Solitude (Superman's home in the North Pole).

See...one version of Brainiac was into collecting cities. Eventually (in Superman #338 which came out in August 1979) Superman was able to restore Kandor to normal size, and they settled on another planet that revolved around a red sun. And that's about as far as my knowledge goes. I have no idea how it's been re-written since then, but I'm sure that some of that history remains somewhat the same.

So you might ask, "Why is Mike talking about Kandor?"

Well, another show that takes place in the Superman universe is headed to television, but it's a prequel to Kal-El (a.k.a. Superman). It takes place on Krypton, and the main characters are Superman's grandparents. A lot of it also takes place in Kandor. And rumors have it that the writing is going to channel the court-intrigue/melodrama that has distinguished Game of Thrones in the fantasy genre. Just imagine the pitch to this show to SyFy executives... "It's like Game of Thrones. But in Krypton." This is so unlike The Expanse, which is like Game of Thrones only in space. For what it's worth, I love The Expanse.

The audience for this show is obviously the same one that keeps Gotham running on Fox (I suppose I'm guilty). But I'm intrigued. If it looks good, I'll watch it. Especially if we get to see Brainiac steal Kandor and other such marvels from Krypton's dying days.
Posted by Michael Offutt, Phantom Reader at 12:06 AM

Email ThisBlogThis!Share to TwitterShare to FacebookShare to Pinterest
Labels: Krypton on SyFy, What is the Bottle City of Kandor