The season six premiere of A Game of Thrones was mostly just setting the table for the other nine episodes, but we at least found out that Melisandre may in fact be immortal. 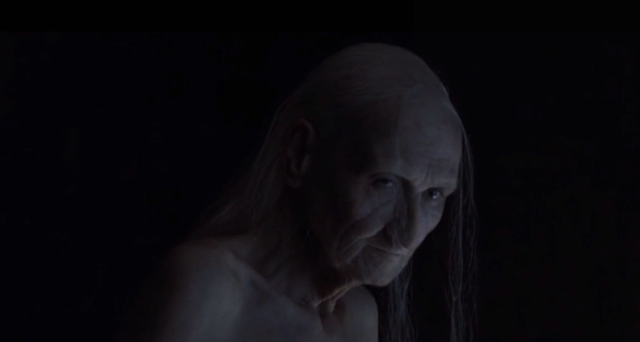 Warning: There are spoilers for "The Red Woman" in this post.

The season six premiere of Game of Thrones titled "The Red Woman," seemed kind of short to me. And then I realized that a lot of the individual scenes were long zoom in shots that took up a lot of screen time. There was a nice panorama of the Wall and Jon Snow lying dead in his own blood, there were impressive shots of Jaime's ship returning from Dorne with a dead Marcella, and nice dramatic shots of Daenerys surrounded by a horde of Dothraki. So my first impulse was that this was an episode of style over substance, picking up where we ended off last season, and setting the table (as it were) for the other nine episodes in the season.

However, there was one shocker: the reveal with Melisandre. I never picked up on that in the books, but I guess it's been in there the entire time, this idea that the Lord of Light empowers Melisandre with glamor--a kind of magic that allows her to change her appearance. George R.R. Martin has also said (I looked it up) that she's ancient. This was a fantastic yet sad reveal. It made me realize that Melisandre needed to use glamor to appear as she does in order to be taken seriously or have any respect. But it does frame earlier events from prior seasons a lot better. For example, remember when she survived the poisoned drink back at Dragonstone? I think that's a hint that she's immortal. I kept wanting her to at least try and resurrect Jon Snow, but she obviously hasn't worked herself up to that yet. She just sits and stares into the flame.

It looks like the many plot threads that scattered the heroes to the four winds might be bringing them together in this season, and I think that's good because the show's at its best when the main characters are interacting with one another. Sansa, Theon, Brienne, and Podrick are headed to the wall to hopefully join up with a resurrected Jon Snow with a Melisandra and Davos at his side. I hope in Daenerys's storyline that we don't get bogged down in Vaes Dothrak. The Dothraki respect strength, so maybe Drogon will fly out of the sky and have all of the Dothraki name her as a Khal--could they even follow a woman like that? Who knows.

As far as what's going on in Dorne, I really could care less. Here it is in season six and we've got these new Sand Snake characters murdering their own patriarchy, and I fail to see how any of them are a part of the big story. It just seems to me that Dorne (like the Greyjoys) is where George R.R. Martin kind of fails because he just kept going with all of these extra characters and storylines and they aren't really connected in any way to the rest of the characters. It's almost like he got so into his world-building that he was like, "Hey...let me tell you what's going on over here..." "Ooh, and over here there's this other thing going on." I mean...it's cool...but I'm one of those people that isn't in love with the world but I am in love with the story. In other words...I don't want to know about what kinds of stew ancient Valyrians made on their nameday, but I do want to know how the Night's King gets his powers. I realize there are all kinds of readers who concern themselves with the tiny nuances of a fantasy world, and their appetite is insatiable. I'm just saying that I'm not one of those people.

And Arya's storyline (to be honest) is getting a little stale. She's obviously going to become a Faceless Man, and I've enjoyed the journey up to this point. But now we're just getting bogged down in the whole "superhero origin" story. I hope there's more to her storyline that explains who the Faceless Men really are. Do they get their power from the Great Other? Is the many-faced god opposed to the Lord of Light? I've thought for some time now that the Faceless Men were actually collecting souls for the White Walkers, which is why it's taken them 8,000 years to make another appearance. I think it would be cool if Arya ended up becoming a White Walker through servitude with the Faceless Men. After all, the Starks have had relations with the White Walkers before.
Posted by Michael Offutt, Phantom Reader at 12:11 AM

Email ThisBlogThis!Share to TwitterShare to FacebookShare to Pinterest
Labels: Game of Thrones, Is Melisandre Immortal, The season six premiere of A Game of Thrones was mostly just setting the table for the other nine episodes