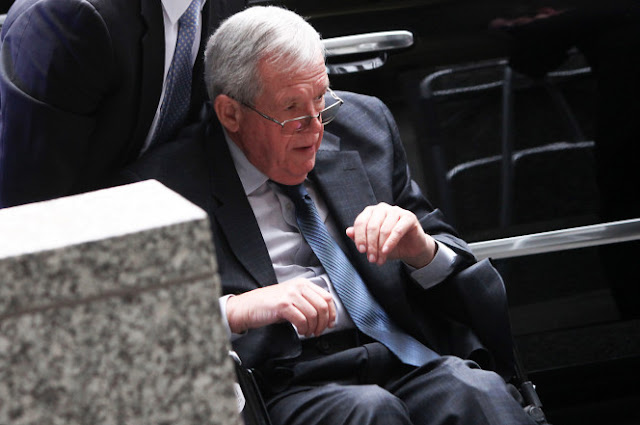 Dennis Hastert, the longest serving Republican Speaker of the House, is guilty of molesting multiple boys. He admitted as much this week and has to serve time for paying "hush money." But the horrors of the crime made me think of other congressmen guilty of sex crimes and scandals, and it made me realize that all of the following names came from the 107th congress (including Dennis Hastert) but I think I'll start with him:

Dennis Hastert (Republican): Sexually abused multiple teenaged-men in the 1970's while in a position of power as a high school wrestling coach.

David Vitter (Republican): Involved with a Washington DC escort service and a scandal around prostitution.

Strom Thurmond (Democrat): Had a mixed-race grown daughter out of wedlock.

Ed Schrock (Republican): Caught soliciting sex from men on an interactive telephone service where men could leave messages for other men in order to get sex.

Steven LaTourette (Republican): Left his wife for a female aide.

David Dreier (Republican): Was vehemently anti-gay and gay in real life (had a partner).

Don Sherwood (Republican): Caught having an extra-marital affair and accused of assaulting a woman who locked herself in his bathroom.

Vito Fossella (Republican): Admitted to an extra-marital affair that resulted in a child while he was married.

Holy crap, people. The 107th congress was bad news. Maybe it's just a weird coincidence that the majority of these names are Republican. I'm sure that's it. :)
Posted by Michael Offutt, Phantom Reader at 12:25 AM

Email ThisBlogThis!Share to TwitterShare to FacebookShare to Pinterest
Labels: 107th congress, Dennis Hastert, Dennis Hastert made me realize that the 107th Congress was filled with sexual predators many of whom marched under the banner of righteousness