Is there a huge population in our country that is suffering from Post Traumatic Embitterment Disorder? And is that even a real thing? 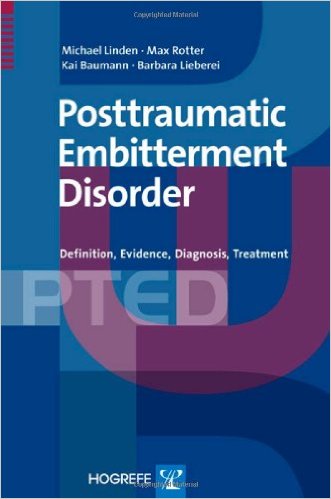 Yesterday in a wild google search, I stumbled across something that caught my eye. It's called Post Traumatic Embitterment Disorder, and you can read about it on Wikipedia HERE. Here's a quote from the article:


Some psychiatrists are proposing this as a mental disorder because they believe there are people who have become so bitter they can barely function. PTED patients do not fit the formal criteria for PTSD and can be clinically distinguished from it, prompting the description of a new and separate disorder.

German psychiatrist Michael Linden, who has conducted research on the proposed disorder, describes its effect on people: "They feel the world has treated them unfairly. It's one step more complex than anger. They're angry plus helpless." He says that people with the disorder are almost treatment resistant and that; "These people usually don't come to treatment because 'the world has to change, not me.'" He believes that 1 to 2 percent of people are affected at any given time, and explains that, although sufferers of the disorder tend to have a desire for vengeance, "...Revenge is not a treatment.

The article goes on to say more, specifically this:


In PTED it is hypothesized to come from a threat to one's basic belief system -- which may be just as life-threatening as physical trauma i.e. an existentialist, metaphysical, value-systems attack.

"From our own clinical observation comes a more specific model, which stipulates a violation of strong ‘basic beliefs’ as the cause for a pervasive mood not of ‘depression’ or ‘anxiety’, but of feelings of injustice and ‘embitterment’. Basic beliefs can be conceptualized as value systems that are learned in childhood and adolescence. They encompass religious or political beliefs and values as well as basic definitions of oneself and one’s personal goals in life. They are needed to guide coherent behavior over the life cycle of an individual, and even over generations for groups and whole nations. This makes them resistant to change, even when confronted with opposing evidence. If these basic beliefs are threatened or violated, it can come either to martyrdom, i.e. an active opposition, or to embitterment, or possibly both. In this context it is of great interest that, for instance, political activists show less psychopathology after torture than non-activists, even when the former experienced more severe torture. It is hypothesized that the core pathogenic mechanism in PTED is a characteristic mismatch between basic beliefs and critical event, so that the event activates this particular, deeply held belief and the associated emotions."

So, the reason I'm posting this is to perhaps spark a discussion based around these questions: 1) Do you think that this is a real disorder? I mean to ask...does this sound legit to you? And 2) Do you think that this is what's going on in our country with the extreme rhetoric we're hearing from presidential candidates? I'd be curious to know your opinions.
Posted by Michael Offutt, Phantom Reader at 12:06 AM

Email ThisBlogThis!Share to TwitterShare to FacebookShare to Pinterest
Labels: Is there a huge population in our country that is suffering from Post Traumatic Embitterment Disorder, PTED