In iZombie are the zombies going to establish a nation where humans are raised as cattle to supply them with brains? 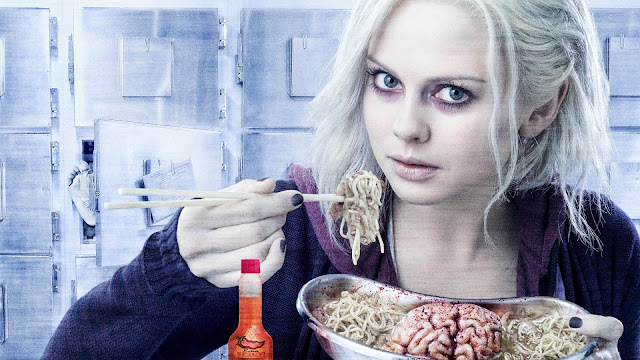 Spoilers ahead :) for season two of iZombie.

iZombie is a great show. The season finale two parter ("Dead Beat" and "Salivation Army") aired this last week, and it continues to impress by solid storytelling, fascinating characters, and a take on zombies that I never expected. Because the zombie outbreak (established in season 1) is chemical and linked to Max Rager energy drinks, there's a mechanic present that makes being a zombie more of an unfortunate lifestyle choice rather than an "end of the world" plague. As you can probably tell from that one line pitch, the story has got lots of humor but can go dark really quick if the situation warrants it. This gives it a kind of humor/horror mix I find really appealing, and it reminds me a little bit of Buffy.

Season Two had lots of very satisfying story arcs too. Clive figures out that Liv's a zombie. At first you think that this is going to be a card that they play very late in the series, but the writers don't shy away from it. Liv needs to reveal herself in order to stop Major from going full zombie in prison (and hurting a lot of people) and proves she's a zombie (to Clive) by stabbing herself in the heart. Unlike in other shows, the writers don't delve into Clive feeling betrayed, etc. and then trying to reconcile that over several episodes.

I also like how Blaine's character evolved. Initially a douchebag zombie, the cure left him with no memory at all of Mr. Boss (who orders Blaine killed). That plan fails and Blaine ends up rescuing his girlfriend in a story arc that's kind of romantic.

The season two finale had a lot of things packed into it, including singer Rob Thomas being eaten by a zombie along with a lot of Max Rager staff. Now the military contractor that had purchased Max Rager is composed entirely of the undead, and Seattle is going to become the capital of a new zombie nation. That sounds really cool...like an apocalypse of a different kind as the nation goes to war against zombies who need to eat their brains to stay human and use cell phones and check Facebook. It makes me wonder who will win, and it makes me wonder if zombies are ultimately doomed or will they become overlords of the humans and begin to raise them like cattle?

The CW is knockin' it out of the park with these shows. Sheesh.
Posted by Michael Offutt, Phantom Reader at 12:02 AM

Email ThisBlogThis!Share to TwitterShare to FacebookShare to Pinterest
Labels: in iZombie are the zombies going to establish a nation where humans are raised as cattle to supply them with brains, iZombie, zombies