Barbara Gordon's gruesome fate in The Killing Joke is getting the full-blown animated treatment this summer. 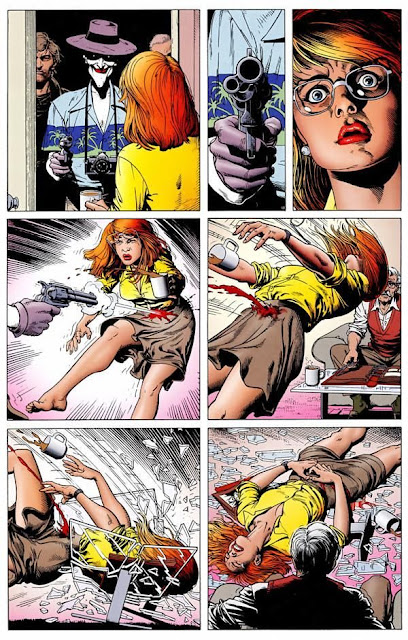 I'm kind of excited that this summer we are getting an adaptation of Alan Moore's The Killing Joke starring Kevin Conroy and Mark Hamill (as the voice of the Joker of course). Whether or not you've actually read and either hated or loved the comic book (it's one that is very controversial), if you collect comics then you know that The Killing Joke is one of the most famous comic books of all time. It has dozens of alternate covers (the one with the green writing on it is the first printing but probably not worth that much money). As people have pointed out before, comic book companies produce such huge print runs of gimicky stories that even several decades later, none of them are worth anything.

The most important thing that you should know about The Killing Joke (if you haven't read it) is that it sets up Barbara Gordon becoming a paraplegic at the hands of the Joker. Basically, the Joker knocks on the door of the Gordon residence, and when Barbara answers the door he shoots her in front of her father, Jim Gordon. Because Barbara Gordon is Batgirl, that ends her escapades and sets her up to become Oracle. Oh and it's implied in the same comic book that she's later sexually assaulted by the Joker's goons because what Batgirl went through wasn't bad enough.


Maybe now that The Killing Joke is being made, it will open the door for other Batman-esque stories: Knightfall, the Long Halloween, and Hush. Also, it'd be nice if an animation studio adapted some of the Swamp Thing stories, because (for a while) Swamp Thing was pretty darn good. Any of you have any opinions on whether or not The Killing Joke should have been animated? I'd love to read your comments on the subject.

Posted by Michael Offutt, Phantom Reader at 12:36 AM