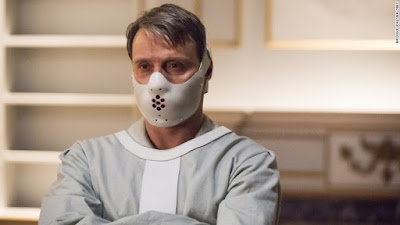 NBC's Hannibal sat down for its last supper this last week. I still haven't gotten around to watching it yet. See, I fell behind as I'm apt to do and then started binge watching the episodes from the season 1 pilot through to season 3 with my friend. I have to tell you as I'm sitting here in the midst of season 3, this now "canceled" series is a masterpiece up there with Breaking Bad. It really really is.

I don't know how many times I said, "I can't believe this show was on network television and that hardly anybody has been watching it." The writing is absolutely superb, and it's not just me that thinks so. It has a 98% fresh rating on Rotten Tomatoes and reviewers from io9 to Forbes have been raving about what a good drama this show is.

Hannibal is probably the greatest villain I have ever seen, and he is a remarkable creation of Thomas Harris. If you enjoy crime dramas, aren't afraid of some gruesome (and maybe a little stomach churning) scenes, and love the psychology that made Silence of the Lambs such a megahit over twenty five years ago, you owe it to yourself to watch this series. I never thought I would ever say this, but the actor that plays Hannibal in the series is better at it than Anthony Hopkins. And the series as a whole is a better tale than Silence of the Lambs could ever hope to be. For one it took the series in a bit of a new direction, however, never sacrificing the integrity of the books and the plot points that made the books so great (Yes, I've read them all). Additionally, it was a conclusive telling of Hannibal Lecter from his early days (a prequel), encompassing the events of Red Dragon, and borrowing heavily from the third book to tell Hannibal Lecter's history.

What a pleasure it was (and is) to watch.
Posted by Michael Offutt, Phantom Reader at 12:58 AM

Email ThisBlogThis!Share to TwitterShare to FacebookShare to Pinterest
Labels: Hannibal, NBC's Hannibal is over now and I gotta say it was better than anything I saw in Silence of the Lambs