Is Mr. Robot noir and if so is it a reinvention of Breaking Bad? 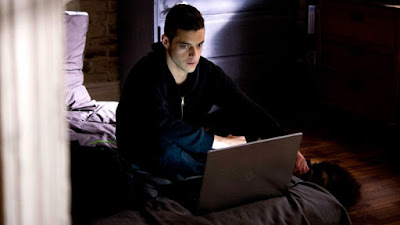 I just figured it out: Mr. Robot is just Breaking Bad, only it's Breaking Bad for techno geeks. Elliott is the stand-in for Walter White and his slow descent into the criminal world is basically the same as Walter White's. I mean, Walter White started out slow by cooking meth for small time drug dealers and then outwitted/killed them. Elliott is essentially doing the same thing: forced to outwit the clueless drug leaders by outplaying them. What really clued me in was last week's episode where he had a gun held to his head, and he began to rattle off all the reasons that the guy holding the gun to his head couldn't shoot him. It sounded eerily familiar to something Walter White might say to Tuco or to Gus.

As a caveat, Mr. Robot is not a ripoff of Breaking Bad by any means, but it certainly seems to be a clever reinvention, however intended as far as the writers are concerned. Which makes me ask the next question: is Mr. Robot noir then? From what I understand, noir is where the main character is basically an anti-hero and we are dragged along on a ride that ends in his ultimate destruction. If this is the case, then Elliott is doomed and the seasons of this show will show us his descent piece by piece (and of course his path will be littered with the bodies of everyone that knows him). We already started this in a way with Shayla's brutal death at the hands of Vera's henchmen.

So what do you guys think? Is Mr. Robot noir and if so is it a reinvention of Breaking Bad? Let's hope so, because Breaking Bad was probably the best television series I've ever seen.
Posted by Michael Offutt, Phantom Reader at 1:02 AM

Email ThisBlogThis!Share to TwitterShare to FacebookShare to Pinterest
Labels: Is Mr. Robot noir and if so is it a reinvention of Breaking Bad, Mr. Robot