A Man from U.N.C.L.E. is delightful in a year chock full of secret agents. 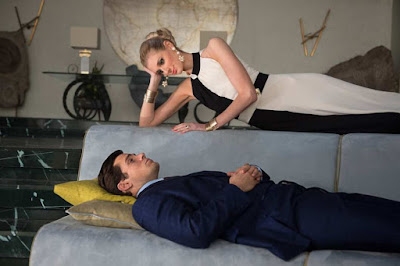 In a way, I suddenly feel like I'm living in the golden age of spy movies. Earlier this year I got treated to Kingsman: The Secret Service, then Tom Cruise served up a stellar Mission Impossible: Rogue Nation, and now Man From U.N.C.L.E. turned in an impressive story set (to my surprise) in the "Mad Men" era of the sixties.

I never actually watched the t.v. show "Man from U.N.C.L.E." so I had no idea what to expect. Henry Cavill as the main lead named "Napoleon Solo" was superb. He had great lines, and his talents perfectly complimented the imposing Russian K.G.B. agent that became his partner. I was wondering when they were going to explain what "Uncle" was and it didn't happen until the last five minutes, which seems like the studio behind it all is bent on creating a franchise. Personally, I'd go see another based on this one, so a franchise seems like a good move.

The movie was delightful. Style is the substance in this Guy Ritchie remake, and I was surprised that there weren't "gunkata" moments like you see in the Batman or Bourne Identity movies. The bad guy (I swear) is a clone of Paris Hilton. I did a double take several times as I was watching, but my friend that went with me to the movie assured me that it wasn't Paris Hilton. The resemblance, however, was uncanny.

Now I guess I have a few months to wait before the next Bond movie which has my all time favorite villain in it called, "Spectre." It looks so good.

Email ThisBlogThis!Share to TwitterShare to FacebookShare to Pinterest
Labels: A Man from U.N.C.L.E. is delightful in a year chock full of secret agents, Man from Uncle