Google is now Alphabet and in that one change was all the money made for the one tech company meant to rule them all. 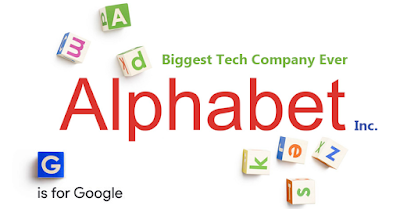 Taking a page from Warren Buffett, the young billionaires of Silicon Valley entity Google (you may have heard of this company) announced that they would be reorganizing under an umbrella company called "Alphabet." Berkshire Hathaway is essentially the same kind of entity, being a huge company that owns things like Heinz, R.C. Willey, and many other companies that Warren has selected over the years. Under Alphabet's umbrella are: Google (now only a search engine company), Calico (a health effort/life sciences/longevity research company), X Lab (a mad scientist kind of company), Nest (a smart home technology company), Fiber (broadband and cable service), YouTube (a video hosting services company), Ventures (a seed and growth stage funding source for startups), Capital (a late-stage growth venture capital fund), Sidewalk (a company focused on improving city living through technological innovation), Android (phones), and a Drone Deliver Service company. Sundar Pichai was made C.E.O. of Google and Larry Page and Sergey Brin will go on to the top two positions at Alphabet. This means all Google stock will become Alphabet stock. 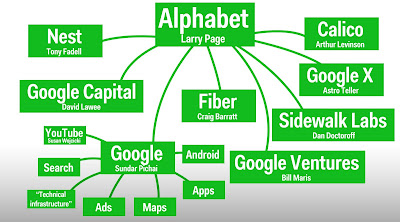 I think this move is actually pretty brilliant. Google was becoming an enormous octopus where the bottom line of one division impacted the other and had the potential to drag it down like lobsters in a basket. It was impossible to see how all the companies figured into the whole because it was all viewed as one company. Now, each separate tentacle of the monster that is Alphabet will have to declare its own earnings and losses and it will be easy to pinpoint what makes money and what doesn't. Snip snip, cut cut, that is the way of things when it comes to capitalism. In a way, it's a lot like editing. It's why we have chapters instead of one chapter that spans 2,000 pages with no breaks. How hard would that be to edit? It'd be one hot mess. Separation of a huge company like Google creates value, transparency, and a catalyst for a capital return to all investors.

I'd be remiss if I didn't say that I find the whole thing fascinating. On one hand we have a company that is exactly the same as it was yesterday, only because of the reorganization, $25 billion dollars was created in the space of just a few hours. That's pretty crazy just to think about, but it also makes me realize just how awesome it is to own a publicly-held company in America. It's illegal to print money, but it isn't illegal to print new shares of a publicly-held company. If you create value in those shares (however it is warranted) then you have your own private printing press on which infinite dollars can just roll off and into your pocket. I wish I could figure out a way to get in on that game. Sigh.

Email ThisBlogThis!Share to TwitterShare to FacebookShare to Pinterest
Labels: Alphabet, Google, Google is now Alphabet and in that one change was all the money made for the one tech company meant to rule them all