Fear the Walking Dead is already better than The Strain and it's only one episode in. 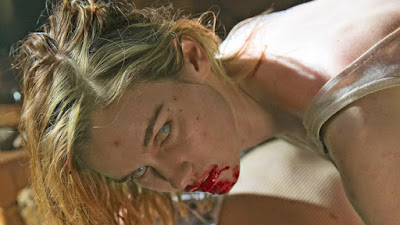 The pilot for Fear the Walking Dead was really really good. It accomplished for me what another apocalyptic undead tale, The Strain, simply fails at. In the 90 minute pilot we got introduced to a junkie named Nick Clark, who stumbles his way around a derelict church where all the other junkies have been killed and eaten presumably by his friend Gloria (a zombie) who (I think) probably overdosed on heroin and then became a walker. And although there was plenty of gore, the show emphasized suspense and atmosphere over action, and in this prequel (which takes place during Rick Grimes' coma) it really works.

The thing that I love about the show are the ominous portrayal of events. A troubled student hints that something strange has started happening across the country. Then there are the horrific events that went down at the church where all the junkies shoot up. There's moody, cinematic lighting, sound, and pacing that actually had me a bit "on edge" even though I just met these characters. And then there's the traffic grinding to a halt with helicopters blaring for "all people to stay with their cars." It's the kind of thing that has just enough "down the rabbit hole" content to it to engender a sense of disquiet and unease in the audience. It's masterful storytelling, and I can't wait until next week's episode.

I almost wish I could tell these characters that what they are witnessing is not just a phenomenon. It is the end of the world, and the crazy has only just barely started.
Posted by Michael Offutt, Phantom Reader at 12:35 AM