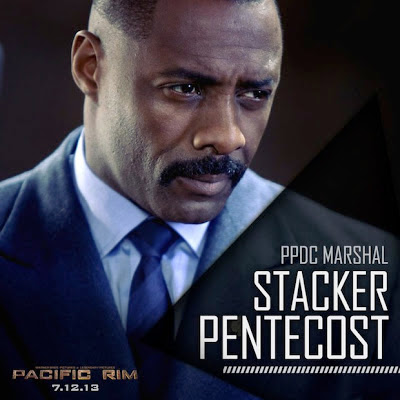 In this first official Pacific Rim clip, Idris Elba shows Charlie Hunnam why he's the man in charge. I'm thinking that the girl Charlie's talking about has been the Asian one seen in the majority of the Pacific Rim trailers. And Idris is obviously head of the Jaeger program to build the giant robots. I love it when he holds the finger to his ear. "Do I make myself clear?" Only acceptable answer: "Yes, sir."

I wish I had thought of a story of giant robots bashing monsters, and I'm totally serious. I think a story like that would be incredibly entertaining to write.

Have a nice weekend. It's supposed to be 100+ degrees every day here in Salt Lake City. I like warm weather, but that's too hot. I'm going to stay indoors with the curtains drawn to keep the sunlight out and the a.c. on. I just hope it's cooler in August when I have to move out of my apartment :(. Alas, the rent has skyrocketed.
READ MY OTHER ARTICLES ABOUT PACIFIC RIM:
Pacific Rim just in time for Christmas. In this article I analyze the different blueprints for the Jaegers and speculate as to their powers!

Thank you Pacific Rim for giving us rockets on the elbow. In this article I'm excited about the first official trailer that has a Jaeger punching a kaiju, augmented by rockets to provide even more thrust. Genius in my humble opinion.

Pacific Rim using a cargo ship as a baseball bat.... The name should say it all, but I wrote this article as an analysis of all the way interesting things that appear in another trailer.

Pacific Rim's focus on size proves it's the man card dispensing movie of the decade. Pretty much I just wanted to post a cartoon pic of a huge robot with a crane standing in for an erection.

If Grown Ups 2 beats Pacific Rim at the box office I lose all faith in humanity. I wrote this to pretty much bitch as to how Grown Ups 2 seems to be generating more interest than this $200 million dollar masterpiece of pure testosterone combined with awesome.
Posted by Michael Offutt, Phantom Reader at 12:03 AM