The battle between Dr. Strange and Baron Mordo had better trump the one between Voldemort and Dumbledore or else! 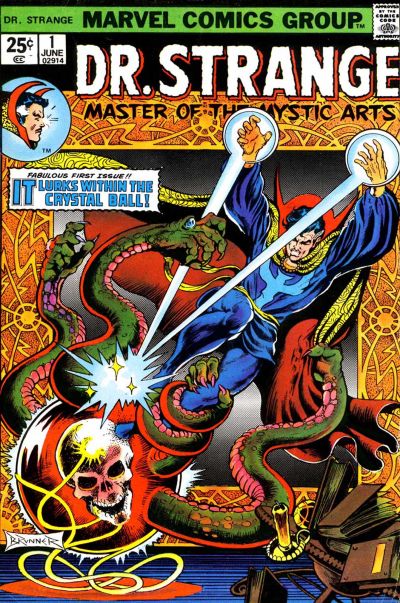 So it looks like Disney is going to move forward with a Dr. Strange movie! I know it's been bantered around for years, talked about in whispers, but just yesterday the villains were confirmed for reals, and that makes me excited.

For those of you who don't know who Dr. Strange is, I will tell you. From the very beginning of his story, Dr. Strange was surrounded by magical artifacts. He has a cloak of levitation, this thing called The Eye of Agamatto, another thing called the Book of the Vishanti, and the list goes on and on. He lives in this place called the Sanctum Sanctorum in the middle of NYC, which (aside from having a cool name) has some very strange Escher-esque details and alien-looking architecture. Just like the Batman, he had a personal servant (only named Wong instead of Alfred) who guarded the house in his absence.
Dr. Strange's roots stem from the mystic East. Think of stories like Lost Horizon and the legend of Shangri La and you've got the total inspiration behind this character. Basically, he starts out as a stuck up neurosurgeon who only cares about wealth and prestige associated with his career. A car accident damages his hands and leaves him unable to work in surgery anymore. His dissatisfaction over the direction his life has taken leads him to the Himalayas where he meets the Ancient One, a hermit who eventually instructs him in the mystic arts.
Now onto the aforementioned villains. According to BLASTR magazine, they are Baron Mordo, Dormammu, and the Mindless Ones. And here's the rundown on what they are/do (because inquiring minds want to know, and I also have pictures):
1) Baron Mordo. This guy was the Ancient One's first student and he tried to murder the Ancient One. Dr. Strange (of course) saved the Ancient One making it so that these two would hate each other for all time. And because they both had the same teacher they're both going to have a similar level of power, which should make for some interesting and exciting special effects-laden battles.
2) Dormammu. He's one of Dr. Strange's greatest villains and is ruler of a place called only "the Dark Dimension." He's also far more powerful in magic than Dr. Strange or even, the Ancient One.
3) The Mindless Ones. These are monsters from another dimension summoned via magic to do the bidding of others (they have no will of their own). Think of them as army ants that every bad guy in the Marvel universe wants to control because they can stream out and destroy things when given a simple command.
Reasons why I'm excited for Dr. Strange: Well I've always liked magic. I liked the Golden Child (I know...I shouldn't because it was terrible but I still do) and I like stories that borrow on Tibetan legends and that go into the Himalayas. It's also one of the reasons I love the beginning of Gremlins so much. I just like how the inventor enters a shop in Chinatown and buys a mogwai after he hears it singing in a basket. That was just really cool. I hope they do a good job with this movie adaptation. I don't think I've any reason to worry because Marvel has been knocking it out of the park for a few years now with their kickass adaptations. But there's a small part of me that worries that Chinese characters will be cast as white Americans. I won't like that one bit if it happens. Here's looking at you Mickey Rooney (in a Breakfast at Tiffany's). If you've never seen the film adaptation of Truman Capote's wonderful book, then just suffice it to say that Mickey Rooney's performance is a slap in the face to every Asian American. When I saw it, I was mortified at how racist and unfunny it was (I'm an Asian American in case you didn't know).
So in finishing, I just want to say that the battle between Dr. Strange and Baron Mordo had better trump the one between Voldemort and Dumbledore in that Phoenix movie. I thought that was the best wizard battle ever. But Hollywood, I know you can do better!
Posted by Michael Offutt, Phantom Reader at 12:17 AM

Email ThisBlogThis!Share to TwitterShare to FacebookShare to Pinterest
Labels: Baron Mordo, Dormammu, Dr. Strange, The battle between Dr. Strange and Baron Mordo had better trump the one between Voldemort and Dumbledore, the Mindless Ones