As a writer myself (and speaking to all of you writers out there who read my blog) I'm sure you're familiar with the phrase "a picture is worth a thousand words." I first heard it uttered by my father in reference to a Charles Russell print that he had framed and hung on the wall of our home. Called "When Shadows Hint Death," it shows two men struggling to quiet their horses because the shadow on the ridge behind them shows a contingent of native american warriors who would kill and scalp them if they knew they were there. 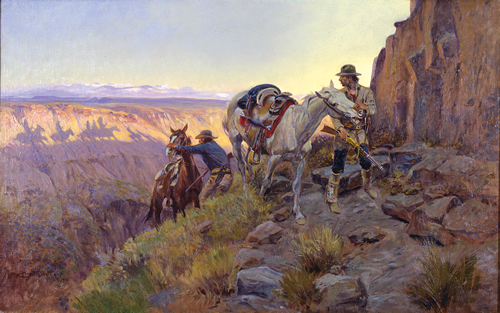 I used to stare at it every day whilst I toiled to complete my homework. And I definitely understood how a painting could capture an entire story. Charles Russell really did do just that, even though his artwork is a little too "folksy and western" for my taste. However, I can't deny that the man had incredible talent with a brush. But whereas a picture is worth a thousand words, I have to say it pales in comparison to a diorama. Here's one that's in the American Museum of Natural History. It depicts an epic encounter between a giant squid (which we now know definitively exist) and a sperm whale. 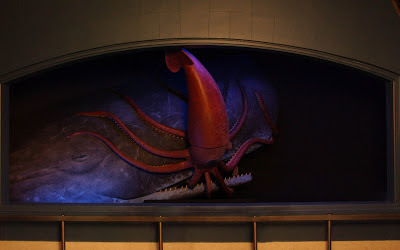 The diorama is huge and brings to life a scene that scientists know probably occurs on a day-to day basis. In this dramatic diorama, a giant squid is caught in the sperm whale's mouth, its tentacles grasping at the whale's head. And if you think that's impressive, wait until you get a load of the diorama called Titanoboa, King of the Snakes. 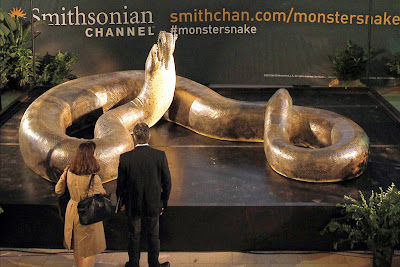 This thing was totally real. It's skeleton was found in a mining area in Columbia and this diorama faithfully constructed from foam by an artist using the scientific measurements provided by the many archaeologists studying this thing. It's freakishly huge...like bigger than that snake in the terrible Anaconda movies with Jennifer Lopez and Ice Cube. It could squeeze its prey with 400 pounds of pressure per square inch.

Dioramas are everywhere if you bother to look for them. You see them in theme parks like the Jurassic Park ride or in Haunted Houses. You can see them in Lego constructions (the kind that take thousands upon thousands of lego sets) or in Christmas decorations. Take for example this incredibly detailed High Elf Sea Port from a Warhammer Fantasy golden demon competition. It seems so real, if I were a tiny human, I could live there. 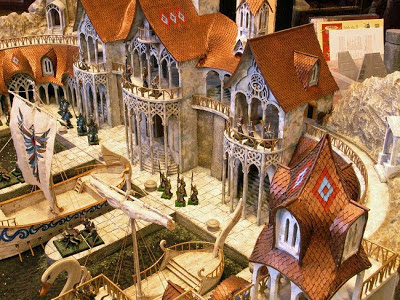 I suppose dioramas are a way we can bring something to life. All that's needed is a desire strong enough to want to go to the trouble to create something in the first place. Have you ever wanted to create a diorama? Perhaps a three-dimensional sculpture of your main protagonist with paint so lifelike they look alive? I'd be interested to hear your thought on whether or not you agree that a diorama is better than a picture when it comes to realizing one's imagination, or even if you're a fan of sculpture versus illustration.
Posted by Michael Offutt, Phantom Reader at 12:01 AM

Email ThisBlogThis!Share to TwitterShare to FacebookShare to Pinterest
Labels: a picture may be worth a thousand words but it pales in comparison to a diorama, Art, Charles Russell, diorama, Kraken versus sperm whale, Titanoboa, Warhammer Fantasy