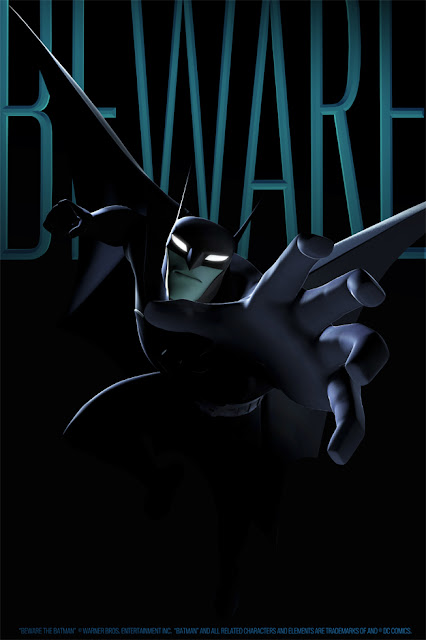 Beware the Batman may be the solution to your Dark Knight woes since the Nolan trilogy has exited the building. What woes you say? I'm talking the voices in your head that scream, "Please give us another movie! Please bring back Christian Bale cause he was the best Batman ever!" Yeah, those woes.

But we all know that isn't happening, like ever. So what is a Batman fan supposed to do? Well for starters, I have to say I'm impressed with what I've seen of the new Beware the Batman series that's supposed to air on Cartoon Network starting Saturday morning on July 13th (that's the day after the Pacific Rim premiere in case you were wondering). And yes, I didn't have to look up that date as for some reason...I have Pacific Rim's premiere basically memorized. BTW, Alex Cavanaugh had the BEST comment on my whining Pacific Rim post yesterday when I stated that I'd lose all faith in humanity if Grown Ups 2 ends up beating it at the box office (pre-emptive "shut up" to Grumpy who says it's a matter of "when" and not "if".)

Anyway, Alex said, "If that happens, we can both go out and smack around anyone who gave money to Grown Ups 2."

I totally agree, and it made me giggle.

I've talked about Cartoon Network's other shows (that got canceled) primarily Green Lantern and the Clone Wars. Go here to read my post on Green Lantern. It looks like they are at least making an effort to bring a high quality animated series to life again to replace those that they lost. And that makes me happy. Let's hope that it has a successful run as the Batman is an incredibly popular character. I wonder though if he'll be too dark for the Saturday morning time slot. Batman is the original emo kid I think.

Anyway, if you like computer generated animation, you may want to click on this trailer and take a gander. Let me know what you think in the comments, and whether or not you'll be watching it.
Posted by Michael Offutt, Phantom Reader at 12:00 AM

Email ThisBlogThis!Share to TwitterShare to FacebookShare to Pinterest
Labels: Batman, Beware the Batman may be the solution to your Dark Knight woes, Cartoon Network, Science Fiction News, The love story of Razer and Aya made Green Lantern a masterpiece