Excited for the return of HBO's A Game of Thrones 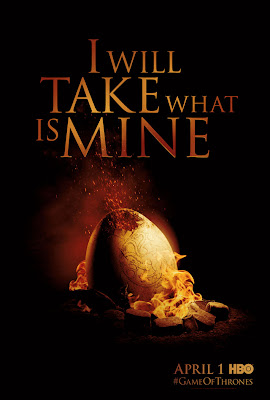 I think that I would be remiss in not admitting my outright excitement for the return of this Sunday's "Game of Thrones" on HBO. I know that I have, from time-to-time taken different looks at Mr. Martin's books. I was not impressed with A Dance With Dragons as an example...but that comes from me being frustrated that I feel Mr. Martin has turned into a capitalist who seeks to milk every penny from his franchise as opposed to giving us the story that so strongly permeates the first three books of his series.

Season two is all about the book A Clash of Kings. And this my friends, is a masterpiece. For those of you who haven't read the books and are concerned that there is no one to step in and fill the void left behind by the death of Ned Stark, I want to assure you that the tales of Westeros do not stop with him. I'm looking forward to seeing Tyrion, Cersei, Jaime, and Daenerys develop. I'm interested in new characters...Milisandre of Asshai, Stannis Baratheon, and Daenerys' dragons (which will become characters unto themselves).

If I had to say one thing about George's fantasy, it's that it got me interested in reading the genre again.  I had wandered into general fiction (which still makes up the bulk of my reading list).  I'd read most of Vonnegut's books, I'd explored non-fiction by reading Hawking, read some young adult (and didn't find it necessarily to my liking), but I hadn't read fantasy (the stuff that I read as a kid) in years.  George changed that with his books. And he seems to be the one that I kind of stick with because, as I've explored other fantasies, they all strike me as knockoffs of what George managed to do, and I wonder how long that trend is going to continue.

I'm really not a fan of knockoffs.  Just to illustrate what I mean by this term, I've heard that "Divergent" is a knockoff of "The Hunger Games"--I've read the Hunger Games...but not Divergent. Again, it's only what I've heard from reading what people write online. I honestly don't care because I'm not going to read Divergent anyway. But it may serve to illustrate my point.

George's story is first and foremost about power. It's an epic that really kind of reinvented fantasy by introducing a psychological component. Instead of a black and white struggle of good vs. evil, it is a complex examination of real world characters who pursue their own interests. I'm excited to dive back into this backstabbing, power-grubbing, drama-filled murderous tale of the most flawed human beings and their struggle to outdo one another by screwing each other over in the most hate-filled ways. Really...it's like looking at our own government. 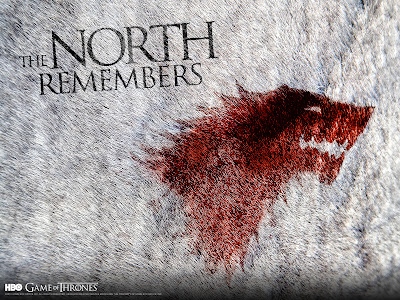 I shall be participating in the A-to-Z challenge starting this Sunday. Have a great Friday and Saturday.
Posted by Michael Offutt, Phantom Reader at 12:02 AM