A King has his reign, and then he dies.

Those are the words spoken by (I believe) Noomi Rapace's character at the start of the amazing second trailer for Prometheus, which was unveiled at Wonder Con just this weekend. Knowing just a smidge about this film, I think that the words are chilling because the context may be a double entendre.  The "king" may also refer to man's domination of the universe and how it may eventually end:
And here is the viral Weyland Industries birth of David the Android
that was also released this weekend.
For those of you who are new to my blog, ‘Prometheus’ is a sci-fi film based on the Alien universe. It stars Charlize Theron, Michael Fassbender, Noomi Rapace and was shot on the RED Epic cameras and the Element Technica ATOM 3d rig. It releases in June 2012.

Dariusz Wolski had this to say about the Epic camera and his work on Prometheus:


"In my opinion, the new Red Epic camera is about to revolutionize all spectrums of the film industry.

I am amazed with the quality of the image and the fact that you can shoot 5k at 120fps without compromising resolution, and...most of all...the size of the camera.

Combined with the Element Technica Atom 3d rig, we will be able to shoot a 3d movie with the flexibility of a conventional cinema camera.

I don’t see anything that comes close to it at the moment. I can’t even imagine the potential Epic will have on the big blockbuster industry as well as independent cinema." 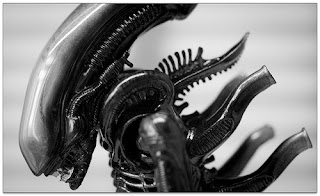