Reading "A Dance With Dragons"

SCENE: Picture it...George R.R. Martin and I in a room. I pick up his massive 2700 page book (that's how big it is on my e-reader) and start reading it. Don't believe me on that...here's pictures of his U.S. editor, Ann Groell, with only 95% of the manuscript earlier this year. 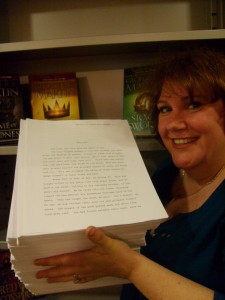 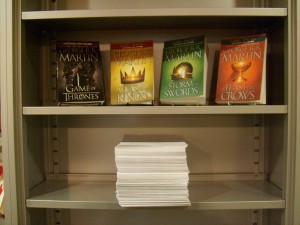 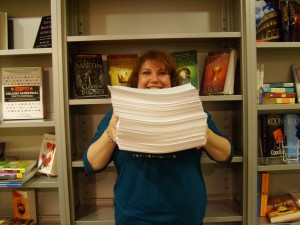 George: "Ah well...if you don't like my book no one is forcing you to--" He tries to take it back from me.

Me: "SHHHH." I slap George's hand. "You're interrupting me." I continue to read. A while later. "The editing in this book is bad too. Who types "'They north rode...' the editors at Random House rushed this thing out. It should say...'they rode north...'"

George: Tries to peel book out of my hand. "If you don't like it you don't have to read it."

Me: "Did I say that? I'm doing you a favor. I need to point out your flaws!!" I continue to read, clutching book protectively so George can't take it back.

George: "Gimme that thing..." He tries to grab for it. I bite him in the hand. I continue to read ravenously.

Me: "Back away from the book, George...just back away. I know I can't stab you in the belly because I need two more books out of you but I can kick you in the shins and run faster than you..."

George: "I thought you hated it."

I love this Tyrion line from the book. He's on a riverboat and eyeing a pious woman with whom he wants to have sex. They are speaking of turtles in the river.:


"I like to watch the sun come up as well," It was like watching a maiden rising naked from her bath. Some might be prettier than others, but every one was full of promise. "The turtles have their charms, I will allow. Nothing delights me so much as the sight of a nice pair of shapely...shells."
I snickered at that one.  Here's another Tyrion line again with the pious woman who this time is bathing. Tyrion is a dwarf (a midget/small person) and disfigured to boot but his brother Jaimie is a beautiful, golden-haired man. He's had to watch his brother (and others) get attention all of his life simply because they are attractive (which is true of real life and something to which I can strongly relate). Here's the line:

"The Mother and the Father made us in their image [Tyrion]. We should glory in our bodies, for they are the work of gods."
The gods must have been drunk when they got to me. <== If I were religious, this is how I'd feel. :)