Frank Frazetta was an awesome painter and inspired the likes of Boris Vallejo, Julie Bell, and other artists to give fantasy a look that would set it apart from other genres. I have been one of the people who wanted to see his work done well on the big screen as a live-action film. I mean, Peter Jackson did it for the Lord of the Rings artists Alan Lee, John Howe, and Ted Nasmith. Well, it looks like Robert Rodriguez is finally going to be the guy that completes the task for Frazetta.

Early next year, the director will start working on Fire and Ice, which you may recall was an animated film back in 1983 from director Ralph Bakshi. But this new film based on Frazetta's paintings will be live action, because Rodriguez wants it to look "like you just stepped into one of his paintings, where you get to see his world, and how he saw people, anatomy, and composition and color."


From his stronghold in Ice Peak, the evil Nekron sends forth a wave of deadly glaciers, forcing humanity to retreat to Fire Keep, a kingdom ruled by a generous king. When King Jarol's daughter Teegra is kidnapped, young warrior Larn teams with the mysterious and legendary Dark Wolf, to rescue the princess and the realm from Nekron's evil sorcery.

How would you feel if a movie was made that captured the essence of the concept art featured below? 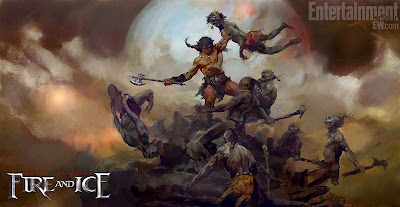 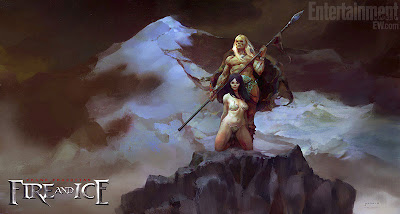