Syfy has got an upcoming two hour pilot movie for a new series that takes place in the Battlestar Galactica universe. Called "Blood and Chrome". Production for it began in February 2011 in Vancouver, British Columbia (the place where such hits as Supernatural are filmed). The movie focuses on the adventures of a young William Adama during the 10th year of the first Cylon war.

According to an earlier press release, here's what we have to look forward to:


"Ensign William Adama, barely in his 20's and a recent Academy graduate, finds himself assigned to the newest battlestar in the Colonial fleet ... the Galactica. The talented but hot-headed risk-taker soon finds himself leading a dangerous top secret mission that, if successful, will turn the tide of the decade long war in favor of the desperate fleet."

It is to air this October 2011. That makes the creepy month of October even better. I will be glued to the television for not one, but two series... the second being the second season of "The Walking Dead"...AMC's blockbuster zombie megahit that I've been slavering for almost a year now. So yeah...this Fall's television lineup is going to be frickin' AWESOME! And not to mention inspirational. Perhaps the writing bug will bite me as I've been mostly uninspired this entire summer :).

Here is concept art for Blood and Chrome. Enjoy! 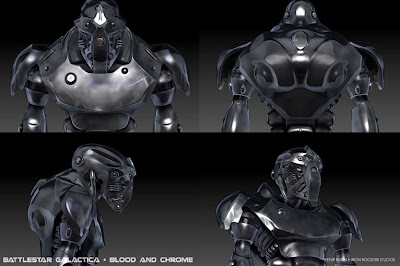 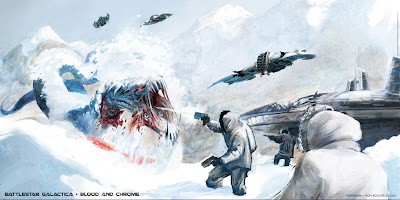 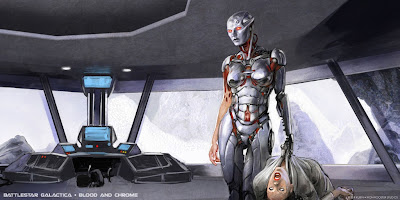 Are you as thrilled as I am?
Posted by Michael Offutt, Phantom Reader at 1:43 AM