Let's talk about a particular kind of body count I've been noticing in MCU movies for some time now. 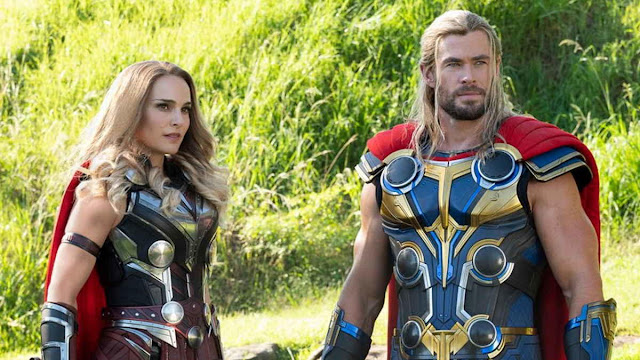 I went and saw Thor: Love and Thunder this weekend. I did enjoy the movie, and I want to talk about something that is a spoiler for those who haven't seen it. So here is your SPOILER WARNING.

Captain Marvel and The Wasp should watch their backs. Seriously. I think other than Pepper Potts, she's the only major female superhero lead who hasn't sacrificed herself and died so that a male superhero can go on to save everyone. Let's look at the female body count thus far in these MCU movies.

1) Black Widow. She sacrificed herself/died so that the Avengers can get the soulstone.

2) Gamora. She was killed by Thanos so that he could get the soulstone.

3) Jane Foster. She was killed by cancer. A wish could have brought her back, but it was used on the bad guy's daughter (to bring them back).

4) Scarlett Witch. She was killed when a mountain fell on her and crushed her to death.

6) The Ancient One. She was killed by Kaecilius and his murderous zealots, but not before setting Doctor Strange on the right path.

7) May Parker. She was killed by the Goblin Glider. It's arguable that she sacrificed herself for Peter Parker, and put him on the path that he is on today.

Lots of women making the ultimate sacrifice so that the boys can shine. I don't know what's up with the writers in the MCU, but this shit is glaring. Like seriously...it is. Do you think it is sexism? Or is it coincidence? Please weigh in if I'm making "too much of a mountain out of this molehill."

Posted by Michael Offutt, Phantom Reader at 7:33 AM

Email ThisBlogThis!Share to TwitterShare to FacebookShare to Pinterest
Labels: Let's talk about a particular kind of body count I've been noticing in MCU movies for some time now, MCU