Why does Namor the Submariner from Marvel get more respect than Aquaman or The Deep? 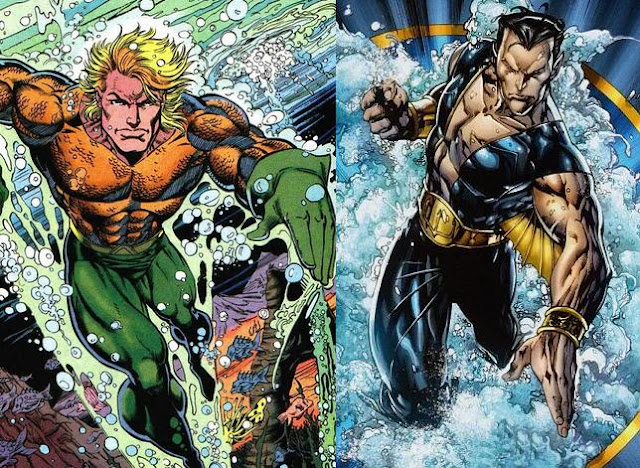 Today's post is less informative than my other posts, as it is asking a question of my fellow nerds out there in the hope that someone can provide me with an answer. Here is the question:

Why does Namor, the Submariner from Marvel get more respect than Aquaman or "The Deep" from The Boys for that matter? Here are a few observations:

They all have similar powers. Although "The Deep" from The Boys seems to have no connections to an underworld community of Atlantis (which probably doesn't exist in those comic books), Atlantis is a very real place for Aquaman in DC and Namor in Marvel. In fact, they both rule those places as kings.

Aquaman seems to have always been conceived as a hero-type, whereas Namor plays a villain quite often. This makes Namor land firmly in the anti-hero description. And The Deep just seems to be pure villain if not outright self-serving yet (ultimately) kind of spineless to stand up for things he clearly knows are wrong.

By leagues and bounds though, The Deep and Aquaman are ridiculed for doing certain things with fish (even though there is no proof that I've seen that Aquaman has sexual relations with fish). And the disrespect doesn't stop there, as he is frequently poked fun at by people who make these movies. I think the Big Bang Theory also took this route with the minority character, Raj Koothrappali, who was a punching bag for the other nerds throughout the series. It was one of the things I didn't like so much about The Big Bang Theory.

I wonder if it has anything to do with the old Superfriends cartoon in which Aquaman was essentially useless most of the time.

Anyway, if some of y'all out there can answer the question above, I'd appreciate what you could teach me about this phenomenon.

Email ThisBlogThis!Share to TwitterShare to FacebookShare to Pinterest
Labels: Comic Books Rule, Science Fiction News, Why does Namor the Submariner from Marvel get more respect than Aquaman or The Deep