The Dark Knight in 2008 contained a scary prediction of how iPhones could be repurposed to spy on people. Now in 2021 it is a reality. 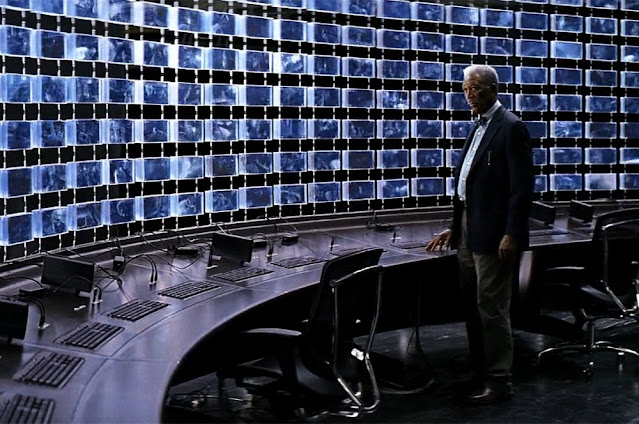 In Christopher Nolan's 2008 movie, The Dark Knight, which starred the late Heath Ledger as the Joker, there is a scene near the climax of the film in which Lucius Fox (played by Morgan Freeman) sees what Bruce Wayne (the Batman) has been doing with his sonar technology. He's enabled it to somehow link every mobile device in Gotham City to his central computer at Wayne enterprises, and then each device would emit a high frequency pulse that could produce a 3-D image of what was going on around that device (essentially spying on the entire city).

Lucius Fox is astounded by this, and he declares that it is too powerful for one man to be in charge of and that it is unethical, immoral, and dangerous. But the Joker was the kind of villain that the Batman desperately needed to catch. He was a psychopath, and extremely dangerous to society. So, the technology was deployed (and used) with the moral implications of this to be left for the audience to decide. But, the Batman, ever the superhero, ultimately gave Lucius Fox the control over the database, and the ability to destroy it so that it could never be used again. So people didn't need to dwell too long on the moral implications of spying upon citizens, and everything got wrapped up neatly in an ending that made The Dark Knight one of the best comic book movies of all time.

Apple, the technology titan behind the iPhone, is rolling out new features aimed at combating Child Sexual Abuse Material (CSAM) on its platform, and the discussion around it reminds me of Christopher Nolan's The Dark Knight. Only in this case, Apple is probably going to be spying on a billion users worldwide. If you hadn't heard, the company is trying to pioneer a solution to a problem that confounds law enforcement, that being the existence of as much as 45 million photos and videos that constitute child sex abuse material that is circulating via online platforms.

Apple's new features use algorithmic scanning of users' devices and messages to search for CSAM. It's a very narrow use of the technology, and everyone who is not a criminal should be on board with this. However, critics foresee an opportunity for the company to repurpose the technology to search for different kinds of material other than CSAM. In other words, they are worried of widespread surveillance, and (quite frankly) being spied upon in their own homes.

"Apple says to "protect children," they're updating every iPhone to continuously compare your photos and cloud storage against a secret backlist. If it finds a hit, they call the cops. iOS will also tell your parents if you view a nude in iMessage."

It's weird to think that The Dark Knight in 2008 predicted that this kind of thing might actually happen, and that it could be misused because it is powerful. I wonder where all of this is going to end.

As for me? I plan to upgrade my iPhone with the new model this fall. It's four years old, and I like Apple products. However, I'm increasingly aware of the fact that my devices are spying upon me. I guess that I just don't care enough to do anything about it. I'm like that guy that keeps eating sugary things even though the doctors tell me it will give me diabetes. What can I say to excuse myself? I like chocolate chip cookies. Someday, I may get a knock on my door by a policeman who says, "You are under arrest." I say, "What for?" He replies, "Your device has alerted us that you support the wrong thing."  And then no one ever hears from me again.

Email ThisBlogThis!Share to TwitterShare to FacebookShare to Pinterest
Labels: Apple CSAM, iPhone, The Dark Knight in 2008 contained a scary prediction of how iPhones could be repurposed to spy on people