In future seasons I think that the Bad Batch is going to explore the Kaminoan connection to all of Emperor Palpatine's clones. 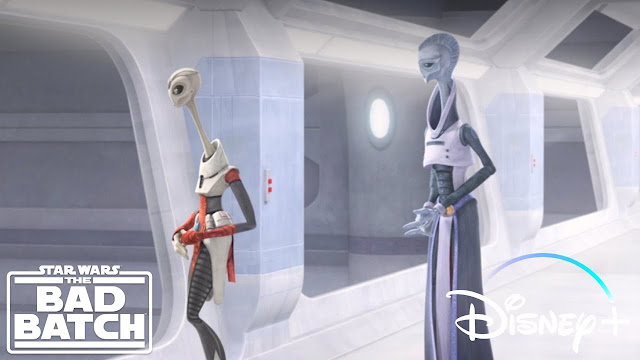 This weekend, I finally finished watching the first season of  The Bad Batch on Disney+. The series brought full circle the plotline that was started in the first episode when it introduced us to a group of clone soldiers who had various mutations making them a "bad batch" (honestly it is a clever name). We discovered that these "mutations"  had been introduced purposely into them by by the Kaminoan clone scientist by the name of Nala Se (who was a fascinating character by the way).

Nala Se (in case you haven't watched the show or aren't good with names) is the female doctor who served the Galactic Republic throughout the Clone Wars. She was the chief medical scientist on her homeworld of Kamino, and she played a key role in the engineering of the Grand Army of the Republic. She also assisted in the rehabilitation of battle-wounded clone troopers and displayed genuine empathy for the clones in the episodes I watched and remember.

Nala Se was also one of the few individuals who knew about Clone Protocol 66, a secret directive encoded into the behavioral modification biochip of every clone in the Republic military. Nala Se believed that the chips acted as a safeguard against renegade Jedi, so she went to great lengths to preserve the secrecy of Protocol 66 during the galaxy-wide Clone Wars.

One of the really neat things that The Bad Batch did was answer questions that I hadn't really bothered asking about Star Wars. But once those questions were answered, I realized that I really did want to know the answers, and so I was actually really pleased with it. One of these questions was: what happened to Kamino, and why was there no mention of it in the movies A New Hope, The Empire Strikes Back, and Return of the Jedi? There also hasn't been any mention of Kamino in episodes 7, 8, and 9. Well, it turns out that the Empire destroyed Kamino, because it didn't want the Kaminoans to use their incredible cloning technology to build another army for someone else. The second question The Bad Batch answered was who was responsible for Emperor Palpatine's clones (of which Snoke ended up being one)?

Well, it turns out that it was probably Nala Se, whose life was spared by the Empire in the destruction of Kamino so that her skills could be harnessed for a "super secret" project on another world, working for the Empire. Geeezz, I wonder what that project could have been? Well, it's not hard to guess where this storyline is leading. And I'm sure that we have not seen the last of Nala Se. Additionally, I believe that Dave Filoni (the creator of The Bad Batch) is probably going to treat us in the upcoming seasons to all the things that Emperor Palpatine was up to with the lead scientist from Kamino (while the Rebellion was fighting its Civil War). If you are a fan of Star Wars, you really should watch these cartoons that are on Disney+. Their animation is absolutely top notch, and the storylines are more interesting than the movies by far.

Email ThisBlogThis!Share to TwitterShare to FacebookShare to Pinterest
Labels: In future seasons I think the Bad Batch is going to explore the Kaminoan connection to all of Emperor Palpatine's clones, Kamino, Nala Se, The Bad Batch