If a foreign policy proposal is more difficult than asking people to wear a mask during a pandemic it should be dropped immediately. 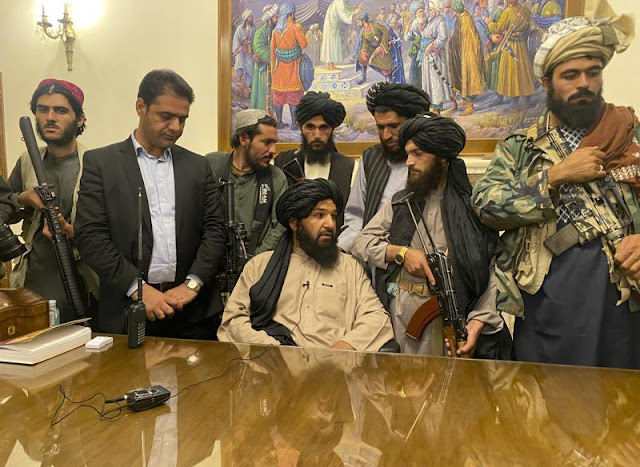 This week, I randomly got asked by a friend, "What do you think of Afghanistan?" It's a huge question, and this friend that I talk with on a regular basis apparently likes my intelligent input (or different take) on things. She (of course) is familiar with the talking points. She's read many of the op-eds that have surfaced from people who were there...who fought on the ground...who were policy makers...and all the other myriad opinions that have hit the air waves. But she was interested in my take on it, so I obliged.

I said, "Going forward, United States foreign policy should add a person to the cabinet that advises the Commander in Chief using what I call 'The Mask Baseline Question.'"

Intrigued, she asked me, "And what praytell is 'The Mask Baseline Question?'"

"It's very simple," I said. "Someone needs to ask the President before an invasion of another country, before anything really that involves a commitment from the United States this one question: Is what you are proposing more difficult than getting the people in Florida and Texas to wear a mask during a pandemic? Is it more difficult than that? Keep in mind...these are your own people...your own citizens. If the change that you are asking is more difficult than wearing a mask to protect others...forget about it. It won't work. It will be a complete failure."

She was shocked, but intrigued by my premise at the same time. Anyway, I'm being perfectly honest about this proposal. The selfishness and hatred by anti-mask wearers has really opened my eyes. People who were assumed to "do the right thing" never actually did the right thing. And that is the truth, and it is universal across all cultures and all continents. If you are going to ask people in another country who worship a god that is foreign to everything you believe to suddenly respect women, gays, and other minorities...it isn't going to work. That is way more difficult than asking a fellow citizen who speaks the same language as you and who lives in the same country to mask up. That is the baseline. Is it more difficult than getting people in Texas to mask up? It is? Then you'd better drop that idea, because it is doomed to failure.

If people were smart about foreign policy, they would bring this question up often. I think it would save a lot of heartache, time, resources, and lives. I'm just glad that everyone is finally figuring out that we've been gaslighted our entire lives that Americans had any form of unity or did the right thing. We've always been divided. We've always had huge gulfs between what we believe. And we've always been extremely selfish. Knowing the truth about a reality allows you to confront and deal with the reality in ways you couldn't do before. I call this the Trump/Covid silver lining.

Posted by Michael Offutt, Phantom Reader at 7:59 AM

Email ThisBlogThis!Share to TwitterShare to FacebookShare to Pinterest
Labels: Afghanistan, If a foreign policy proposal is more difficult than asking people to wear a mask during a pandemic it should be dropped immediately