The Mysterious Benedict Society on Disney+ is a Wes Anderson-esque journey into a land of smart kids and mustache-twirling villainy. 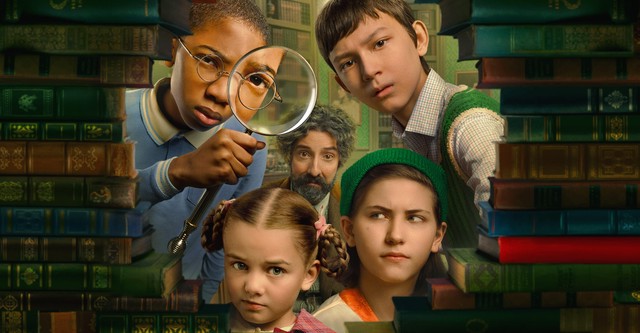 Because I watched The Bad Batch I was on Disney+. My friend Meg was watching it with me, and as I was navigating the page on Disney+'s splash page, another series caught her eye: The Mysterious Benedict Society. She said, "Can we watch that?" So, I said sure.

Meg had read the book; I hadn't. As a matter of fact, I hadn't even heard of it. As we sat down to watch the story unfold, she was delighted to see characters that she remembered from the book being shown on the screen. Soon afterward, I too became a fan. Then, a few weeks later, I bought a thing on Facebook marketplace that was in Nampa, Idaho, and we went on a road trip of about ten hours to go and retrieve it. Meg asked if we could listen to the audiobook for The Mysterious Benedict Society, and I thought that was a wonderful idea. So that's what we did while we drove all those miles, and the story made the journey all the more enjoyable.

Now, having finished both the audiobook and the series (we watched the last episode this weekend), I can say that it is an engaging screen adaptation. Also (apparently), this show is a classic series of children's books. I seriously had no idea that they even existed...I suppose that is how clueless I am about young adult stuff. The author is named Trenton Lee Stewart, and the first book (which is the first season of the show) features remarkable children doing amazing things. The setting is a sinister academy. And each child has unique traits that makes them suitable to overcoming a task or challenge that even adults would find impossible. The show is clearly geared toward the younger audience, but there's a lot to appreciate as an adult. So, it's not like watching some clearly weird and alien thing like Teletubbies. In fact, it shares a lot of tone with mystery-themed predecessors like The Bloodhound Gang or The Hardy Boys.

Now, the world that the kids inhabit is eerily similar to our own. It is in an international crisis…think all the headlines that worry you every day…and this manufactured crisis talked about on the 24-hour news cycle is aptly named, “The Emergency.” Mr. Benedict, the man responsible for gathering the super talented kids together through extensive (and fun) test-taking, believes that the source of this global panic is subliminal messaging that gets sent out from an island academy of children. The head of the organization is his twin brother, and both of them suffer from narcolepsy.

The showrunner of The Mysterious Benedict Society clearly drew inspiration from Wes Anderson films. So, it’s a real treat to watch. One of the kids has an eidetic memory, which means that everything “sticks” to his mind. Thus, he’s called “Sticky” Washington (his real name is George Washington). However, my favorite character was Constance Contraire. She is a very stubborn, young, and super intelligent member of the Mysterious Benedict Society. In the audiobook, she talks (a lot) in rhymes. This didn’t translate well to the screen adaptation. But her ability to throw shade (and lots of it) absolutely did, as she lets no moment for insults slip by unnoticed.

Mr. Benedict also has three really interesting assistants. One wears yellow all the time, and in the audiobook she is described as resembling a yellow pencil. Her name is merely “Number Two.” The second assistance is Rhonda Kazembe, and the last is a gruff spy named Milligan who has the ability to almost magically disguise himself, and who comes up with some really wild things that actually work (like traveling to the island in a submarine held together by...essentially...duct tape) to rescue the kids. He suffers from amnesia, but even with this lack of memory, he has uncommon skills (as do all of the assistants).

For example, Number Two builds a cottage in the woods in a single night using just an axe. And it is complete with electricity, shingles, windows, and a peregrine falcon. The Mysterious Benedict Society would not be complete without its mustache-twirling villain. Called Mr. Curtain, he is the twin of Mr. Benedict, which makes the story all the more charming, because of the confusion that this creates. And naturally, there is a mad scientist who created the machine beaming subliminal messages around the world to create The Emergency in the first place. The villain, in predictable style, does get away at the end. However, it is clear that he has learned nothing, and the show's ending hints at more evilness that can be explored in the second season (and which will probably be thwarted by the combined talents of The Mysterious Benedict Society).

If you enjoy young adult fare and the Wes Anderson style of film making, I'd recommend this series. It's visuals are a delight to watch, and the story (once you set your adult mind on a shelf for a while) is actually pretty good. I also recommend the audio book, because the narrator does an incredible job reading it out loud and giving voice to all of the characters.

Email ThisBlogThis!Share to TwitterShare to FacebookShare to Pinterest
Labels: The Mysterious Benedict Society on Disney+ is a Wes Anderson-esque journey into a land of smart kids and mustache-twirling villainy, Young Adult Fiction Stereotypes