This last week's Lower Decks had Tom Paris and it featured him on a commemorative plate from the Voy days. 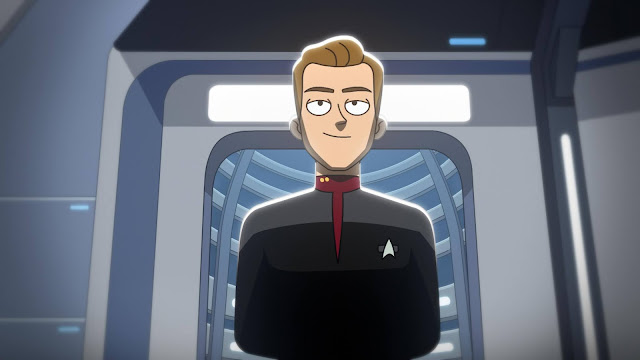 I got caught up on the Star Trek cartoon that is on Paramount+ called Lower Decks this weekend. It's always thoroughly entertaining, weird, and funny. I love the characters (and some of them remind me of real life people I know), and I'd have to say that the people working on Lower Decks definitely have a passion for the franchise that is quite different in flavor from Discovery and Picard (disclosure: Picard is my least favorite of the new Star Trek offerings).

If you haven't watched Lower Decks and you are a Trek fan, you might want to give it a try, especially if you are a Rick and Morty fan. Most of the "Nu Trek" shows really do take themselves very seriously. In the era of Next Generation Trek, I think DS9 was probably the most serious, but even DS9 lightened the load with episodes like Take Me Out to the Holosuite or any of the Ferengi episodes. That being said, there is nothing serious about Lower Decks. It is one big gag real LOL'ing all the way by screaming old jokes.

In last week's episode, we got a guest appearance from Tom Paris, who was the hot shot pilot on Voyager, and he got voiced by Robert Duncan McNeil (which I love). Tom was probably my second favorite cast member next to Seven in the Voyager show (although pretty much all of the characters were great). I also loved how Boimler referred to Voyager as just "Voy." Bless these nerds for canonizing the way fans refer to the Trek shows. The commemorative plate that Boimler carried with him to get signed was excellent too, as it reminds me of all the Trek memorabilia that's been put out by the Hamilton Collection over the years. Sometimes Trek is at its best when it takes the time to really poke fun at itself, and its fanbase. And this seems to be entirely the thought behind this refreshing Star Trek series.

Email ThisBlogThis!Share to TwitterShare to FacebookShare to Pinterest
Labels: Lower Decks, Star Trek, This last week's Lower Decks had Tom Paris and it featured him on a commemorative plate from the Voy days