Star Wars: The Bad Batch is basically an enjoyable A-Team in space but it doesn't take many risks with its world-building. 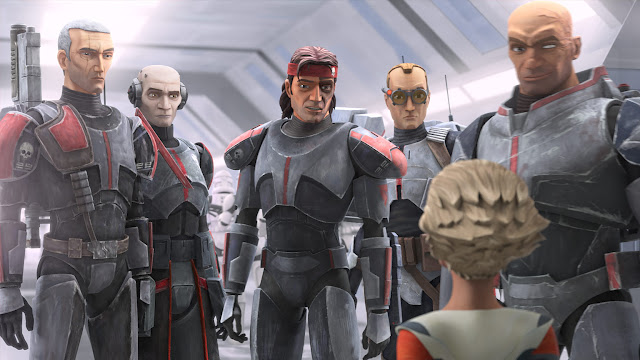 Is anyone else watching the Star Wars series called The Bad Batch, which is on Disney +? I watched a few of the episodes this weekend, and I really like them. The story follows a group of clone troopers who have a bad microchip in them that made it possible for them to ignore Order 66 given by Emperor Palpatine, and to set off on their own in a galaxy that has gone full fascism to the max.

Thus far in the series, we have seen cameos from Bib Fortuna (Jaba the Hutt's MajorDomo), the Rancor that Luke killed (in adolescence it was playful and called "Moochie"), and the bounty hunter Fennec Shand (who is in the Mandalorian). In The Mandalorian Fennec is friends with Boba Fett and is played by Ming-Na Wen (who was also in Agents of S.H.I.E.L.D.).

I don't have many nitpicks with the series. The ones I do have are centered on the same complaints that I had with The Mandalorian. For example, the architecture of different areas of the galaxy more or less repeats itself. People (no matter what planet you happen to be on) still put the most important computer consoles out on these rickety things with no railing that are suspended over a huge drop. And the same old planets that you've seen before get to be set pieces yet again for another series. Tatooine is the worst of these. We can't ever seem to be able to get away from Tatooine. I suppose that we can chalk this up to world-building, and the fact that it is hard and complicated. Using characters and sites with which viewers are already familiar is much easier. However, they are taking small steps. We've seen a small village and another side of a Correllian city that we didn't get in the Solo movie.

As for the subject matter of Star Wars, it seems spot on. Star Wars has always been pretty heavy and dark. In my opinion it started out as a commentary about American imperialism as pulp science fiction. The only thing that made it kid friendly was the tone. But the moral scales of the show has always kind of circled around killing Nazi-esque soldiers who are just following orders. And when you went one layer deeper, in many of these cases it was slaughtering genetic twins (which reminds us of some Concentration camp stuff). In The Bad Batch we have one clone in what I can only describe as "The A-Team in space" going 100% evil because the Kaminoans (who made him in a test tube) are amping up the malfunctioning genetic chip in his brain. We have yet to see where that goes, but I can hazard a guess that it won't be good.

Anyway, the series is obviously not done airing its first season. I took a much-needed break from other things I'm dealing with in my life to watch the show. I'd recommend it if you are a Star Wars fan, and I'd like to hear your thoughts on the show if you are watching it.

Posted by Michael Offutt, Phantom Reader at 8:07 AM