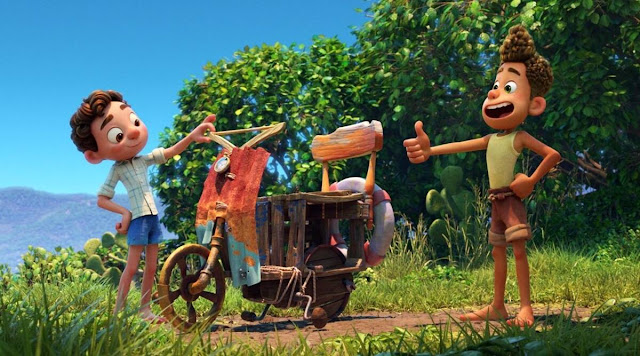 I watched Pixar's Luca this week. Just like other films from the Pixar Animation Studio, I liked how bold and beautiful it looked. The main characters of Luca and Alberto were pure and innocent, and they were very relatable in context, because this is the first movie that really broaches gay love. The fact that they are fish people (merfolk?) becomes a pretty strong metaphor by the end of the movie, when the grandma declares, "There will be people who won't accept him for who he is. But I don't think it will be a problem, because he seems to know how to find the right kind of people."

It's not the first movie that broached these kinds of topics. Call Me By Your Name, which was a wonderful coming-of-age story clearly meant for adult audiences, was also set in Italy and about two males who spent their summer together (and who got to know each other very well). Luca though is a children's movie...so the subtext is extremely subtle with jealous looks given by Alberto when his friend Luca seems to be bonding with the female in the movie named Giulia, who becomes a crucial part of their adventure. But in the end, Luca expresses the purest form of love for his friend by letting go of their dream to escape on a Vespa together to see the world. Instead, he sells it, and he uses the money to grant Luca's wish to go and attend school so that their one summer together just becomes a memory.

I think it's nice that Disney is starting to tell queer stories after decades of being in the zone of telling stories about white, straight characters. It's a baby step in the right direction to embrace on-screen diversity and representation. It's too bad it didn't make more of a splash. Pixar/Disney hardly marketed it at all. So people will essentially just have to stumble across it as a stealth-released Pixar movie on Disney+. The queerness of the story is subtle enough that those who don't look very deep will undoubtedly miss it, which will probably save Disney from having too much of a headache from the likes of Tucker Carlson. But the wink from the company is there. I saw it, and for a brief moment (at least) it brought me joy.

Posted by Michael Offutt, Phantom Reader at 7:52 AM

Email ThisBlogThis!Share to TwitterShare to FacebookShare to Pinterest
Labels: Gay Pride 2021, Luca, Pixar gave a strong wink to all us queers celebrating pride month in their June release of Luca, Pride Month