I finished reading the Riftwar Saga of thirty books. It was mostly good even if it may have jumped the shark quite a while ago. 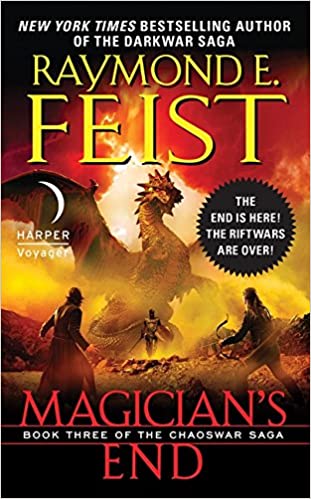 This weekend, I finished reading the Raymond E. Feist Riftwar Saga that spans thirty books while 100 degree temperatures settled in over the very parched western states. The last book in the series, Magician's End, was a bit of a slog of a read in the sense that it had a saggy middle. Feist was clearly wrapping up a lot of plot lines and had decided to devote his last novel to the politics of kingdoms, i.e., who gets the throne of the Kingdom of the Isles, etc. All of this while a greater threat from outside the world was happening under everyone's noses. While reading, I kept asking myself how I would have ended this series were these my characters. I suppose I wouldn't have done anything different. And I think that means that the series went on far too long, and it was really (in the end) dried up of any new stories to write about.

The Riftwar Saga in itself is quite an accomplishment. Thirty books means that the author and all those who participated in this magnum opus felt very strongly and passionately for these characters. Their origins may have been in Dungeons & Dragons games, but they got the full respect and treatment one would want for labors of love minus an actual movie from Hollywood. The author's stories were good, but the continual characters that were the backbone of the series all suffered from clear "power bloat," which is also a thing that plagues high-level D&D games. "Power bloat" is a phenomenon wherein a character gains so many powers, levels, and abilities over the course of play that they sail into retirement, because a story creator can no longer come up with ideas to challenge these mind-blowing and powerful characters. I never thought I'd see such evidence of this phenomenon in written books, but by the end of Magician's End, the main character was essentially a god. Rather than just "be a god" the author decided to kill off the main character in a most spectacular and very heroic way. I guess this was his method of letting go, so that he could focus on other projects and other stories. It would have been very difficult to write stories that involved an essentially omnipotent being anyway, so death in a heroic blast off was a solid way to say, "I'm stepping away from this project forever, and I'm glad you enjoyed the ride."

When I think of the Riftwar Saga, I'm kind of amazed at how much Feist decided to blend modern concepts of science into his epic fantasy. His characters in getting to know the universe leave few rocks unturned, learning about (essentially) quantum mechanics, ever expanding space, the fusion that drives stars, and other such things. Some of his characters proclaim loudly that magic doesn't really exist, even though there are magicians a plenty in the world working magic. But then as time goes and you delve into the story, you begin to see that what might be magic may be just another kind of physics that involve particles changing what they want to be at an atomic level and how magic just may be a way to encourage those particles along a pathway.

He even overexplains his bad guys, kind of taking away the mysteries of them. His demons that he introduces you to in earlier books are at first terrifying. But in later books, you just come to realize that they used to be the same host as angels and were separated in the ancient past. Hell (where the demons come from) is just another universe. And the demons have cities and their own people. They raise young and fear an ever increasing blackness at the center of their dimension. Demystifying all of this made the demons less like this evil force, and more like just another fantasy race like elves and dwarves. The big bad itself, which was this void thing called the Dread that wanted to eat all life in the universe was explained away too. Apparently, in the beginning of Feist's cosmic creation there were these two entities. One was curious and the other wasn't. The curious entity left the incurious one and started to investigate all of its ideas that it had. It created time as an organizational tool so that all of its ideas would not happen at the same exact moment. So time was literally this thing that allowed other things to be spaced apart and be organized instead of chaotic.

Well, all of this preoccupation by the curious entity made the incurious one lonely. So it attacking everything in reality to eat it and destroy it was really just its attempt to unravel time so that the curious entity would come back to its state of being and be peaceful in a kind of timeless bliss (as it had been before) with the uncurious entity. It was a weird concept that did make sense. However, it removed all of the horror to know that this was fundamentally what was going on. I felt like the big bad had been overexplained. It was still as annihilating as a black hole is, but by knowing exactly what was going on, it somehow became less interesting than it would have been were it some awful monster. Ah well. Were these choices that I might have made? I don't know. The only thing I do know is that thirty books is a lot for any one person to accomplish, and I suppose he did all right when it comes to that kind of dedication. After all, these super powerful characters needed something to figure out, because "big monster go smash" had happened so many books ago that to be original, the author needed something that would be different and justify all those pages.