Let's compare notes on the Mandalorian which wrapped up its second season in December.

So, I want to talk about The Mandalorian for a moment. It ended its second season last month, and when it ended my first thought was that, "It's not enough." I deeply miss longer seasons of television, but eight does work in a pinch. And then I had a flood of other thoughts. If you haven't watched it by now, you might want to stop reading as I'm going to spoil the whole thing for you in discussing these thoughts.

Okay then, second thought: Why did they deepfake CGI a young Mark Hamill's face onto the body of an actor. There are two reasons for my frustration regarding this choice. The first is that within the Disney stable, they've already got an actor that looks a lot like young Mark Hamill. He's Sebastian Stan, and here's a pic comparing the two of them. 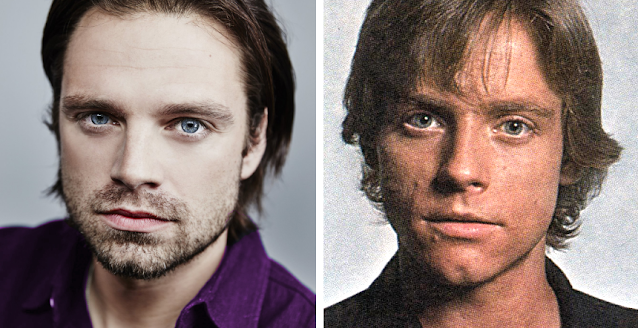 In my opinion, the resemblance of young Sebastian Stan to Mark Hamill is uncanny. Furthermore, Sebastian Stan said that he would play the part if it were offered to him. Like...he's already willing. He'd just have to juggle the new gig with his role in The Falcon and the Winter Soldier.

This seems like a big "missed opportunity" for Disney primarily because I know that the kind of "deep fake" stuff that Disney is doing to paste Mark Hamill's face onto the body of an actor is probably a thing that they don't want to do all that much. Why? It looks terrible. But... it also means that we probably aren't going to see Baby Grogu all that much anymore too. If he's off being trained by Luke Skywalker, it means that the supporting character of Baby Grogu is probably being written off, and I don't like that. I liked the kid. I thought the kid was an amazing character.

Third thought: Just like in politics, being extremely good at something and being passionate about something does not make a person the right one for the job. Specifically, I'm talking about J.J. Abrams. J.J. is brilliant. I like a lot of his stuff. But he wasn't the right person to hand the reigns to when it came to Star Wars. And look...to follow me down this rabbit hole...you have to ignore box office receipts. And yes, I know that box office receipts are all that matter. Okay...that being said...please ignore the billion plus dollar box office, so that I can make a point.

J.J. is king at the box office! All hail J.J. Let's just work that out of our system. Because...he's still the wrong person for Star Wars. The right people are Jon Favreau and Dave Filoni.

Now look...If you got J.J. in a room with Jon Favreau and Dave Filoni, I know you wouldn't be able to tell them apart as far as Star Wars geeks go. J.J. would be right there rattling off his favorite moments along with the rest of them. He would pass every geek test. His track record is impeccable when producing money comes to bear. But he's still wrong. Jon Favreau and Dave Filoni just know how to tell a Star Wars story. They just do...and they tell it way better than J.J. They're doing such a fine job, that the excitement around Star Wars is essentially due to their efforts with the animated series and with The Mandalorian and their other projects. I can't tell you why they are better. They just are, and I'd rather watch and listen to stories where Favreau and Filoni are collaborators, than listen or watch one where J.J. is in charge.

My fourth thought is that the creators of The Mandalorian know how to build a story. I didn't even think that there was any reason to return to Tatooine. In my mind, this dusty planet had no tales left to tell. Boy, was I wrong. When I saw the krayt dragon early on in season two, I remembered wanting very much to know what a krayt dragon looked like (all the way back when I was a kid)! I'd just forgotten. And lo and behold...there it was. And then we got to find out that Boba Fett escaped the Sarlac pit. We also got to see Boba Fett take over the old palace that Jabba the Hutt used to call home. All of these events fit into one season of eight episodes. I went into this season of The Mandalorian with no idea what it was going to be about, and I came out of it deeply satisfied with that kind of fan service.

My final thought regarding this season is with regard to Ahsoka Tano. Rosario Dawson is perfectly cast, which irritates me just a little because Rosario Dawson kinda makes my eye twitch with her refusal to support Hillary ("but her emails") Clinton in 2016. Her and Susan Sarandon both make my eye twitch. Because of people like them, we got Trump, who has proven to be a traitor to our nation. Like most liberals, I'm willing to "let it go," but still...my eye twitches when I see them in a role. But that's it...I'm not angry at either woman....just disappointed that they made selfish choices in an era that probably felt safe to make selfish choices. After all, no one (except me) thought it would get this bad with the country 27 trillion in debt, that there'd be 350,000 people dead, where domestic terrorists storm the capitol, and where the world is on fire. Such is life. But yeah...eye twitch. However, I'm excited to see more Ahsoka, even if it is from an actress who gets on my nerves.

And those are my thoughts on The Mandalorian. Do you have any? Have you watched it?

Email ThisBlogThis!Share to TwitterShare to FacebookShare to Pinterest
Labels: Let's compare notes on the Mandalorian which wrapped up its second season in December, Star Wars, The Mandalorian